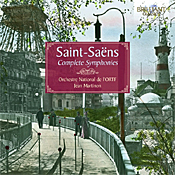 Do I see a trend here? Well, it’s a trend that’s been developing for the past decade or more: Smaller record companies are licensing older recorded material from bigger companies and re-releasing them.  Think of PentaTone, Newton Classics, FIM, HDTT, and now Brilliant Classics. The case in question here is Jean Martinon’s recordings of the complete Saint-Saens symphonies, which Martinon recorded for EMI in the early-to-mid Seventies. The thing is, it’s not as though the EMI editions are hard to find. A quick glance at Amazon shows there are actually four different EMI editions available new, two from the parent company, one from EMI France, and one from EMI Japan. Yet in 2012, EMI apparently licensed the recordings to Brilliant Classics, and they all sound pretty much the same. Whatever, you can never have enough editions of these fine Martinon performances, so the more, the merrier.

French composer and pianist Camille Saint-Saens (1835-1921) wrote five symphonies; however, only one of them, the Third “Organ” Symphony, became at all popular. Even so, its popularity is so immense, it doesn’t matter that the others have found relatively little favor. They’re still interesting, but quite overshadowed by their big brother. It’s good to have them all together in one package if for no other reason than curiosity’s sake. Who knows; a person familiar only with the Third might soon find a new favorite among the others.

Anyway, Saint-Saens wrote his first two symphonies, the Symphony in A major (c. 1850) and the Symphony No. 1 in E flat (1853), while he was still in his teens. Then, he wrote the Symphony in F “Urbs Roma” in 1856 for a writing competition, which may explain why they aren’t quite as mature and well developed as the later works. Even the Symphony No. 2 in A minor (1859) is a relatively early, youthful piece, especially when you consider that the composer didn’t write his monumental Third Symphony until 1886. Thus, what we have are four symphonies written when Saint-Saens was in his teens and twenties, and the final one over a quarter of a century later when he was in his early fifties.

Disc one of this two-disc set begins with the little Symphony in A, unpublished in the composer’s lifetime and seldom recorded. That’s OK; I doubt that anyone could do it more justice than Martinon. There’s plenty of youthful vitality in the work, and Martinon seems to delight unapologetically in it. There’s a lot of Mozart and Mendelssohn in the music, too, which Martinon enjoys as well.

Next come the first two numbered symphonies that Saint-Saens published. Symphony No. 1 begins with a delightfully lilting Adagio that shows the influence of Schumann. The second movement is reminiscent of Bizet; the slow movement of Berlioz; and the finale typical of much French ceremonial music. Martinon pulls all of it off with finesse, making it appear more original and substantial than it probably really is.

Then, disc one concludes with the Symphony No. 2, the best of which comes early, in the first-movement Allegro. It displays a lively seriousness not found in Saint-Saens’s early works. The symphony soon transitions into a more-temperate and completely charming Adagio. The Scherzo and finale return to the energy of the first movement, where Martinon maintains the music’s Mendelssohnian mood and style. 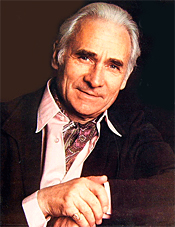 Disc two opens with the unpublished Symphony in F, subtitled “Urbs Roma” (Rome city or city of Rome). Martinon manages to infuse it with a grand sweep that is really quite engaging, especially in the vibrant if slightly dark Scherzo. Still, the work is really just a prelude to the composer’s monumental “Organ” Symphony that follows.

With Martinon’s handling of the Symphony No. 3 in C minor, we get an elegant, graceful, refined reading. Not that it doesn’t catch fire, but if you want something more dashing and exciting, I recommend Charles Munch and the Boston Symphony Orchestra (RCA or JVC) or Louis Fremaux and the City of Birmingham Symphony Orchestra (EMI), who are more explosive in the work. Nevertheless, Martinon pumps up the adrenaline levels, too, while providing a relaxed, expansive, wholly sympathetic interpretation.

The recordings, which EMI made in 1972 and 1974 for the four early symphonies at the Salle Wagram, Paris, and in 1975 for the Third Symphony at the Eglise Saint-Louis de Invalides, Paris, sound uniformly good, if a tad on the warm, soft side. The stereo spread is wide, although the stage depth seems somewhat limited, except in the Third, where it opens up a little more. While the bass could be deeper for the organ, it’s a minor concern. Dynamics also seem a bit restricted; again, not to worry. Overall, this is an extraordinarily smooth, accommodating sound.