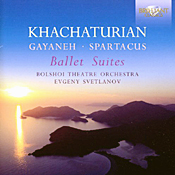 Much of the music of Soviet-Armenian composer Aram Khachaturian (1903-1978) has always struck me as rather noisy and bombastic, and that includes even his most-popular pieces like the ballets Gayaneh and Spartacus, which on this disc we see represented by a pair of suites. In their entirety the ballets can be a little tiring, so it's more common that we see just highlights such as these.

Khachaturian became one of the giants of music in the Soviet Union, yet like so many of his contemporaries, the Communist Party did not always favor his works. His Cello Concerto of 1946 was so out of line with the traditional guidelines of the Party that shortly thereafter they ousted him from the Composers' Union over it and other things, and it took him a while to regain their favor. Turns out, the Party's official disapproval so affected him, he later said he considered giving up composing and starting some new profession instead.

In any case, his first attempt at a ballet, Shchastye ("Happiness"), in 1939 did not go particularly well so he reworked it into the ballet represented here, Gayaneh, completed in 1942. It's the story of a young Armenian farm woman named Gayaneh. In the original version, Khachaturian had both a love angle and an Armenian national angle, but he later figured it best to go with the just the romance, adding local color with Armenian and Central Asian folk tunes. Because the music celebrated the friendships among the varied peoples of the Soviet Union, the Party leaders liked it. Afterwards, he finished Spartacus in 1954, the Soviet leaders pleased that he had chosen a "hero of the Proletariat," the Roman slave who led an uprising against the oppressive Roman Empire.

Evgeny Svetlanov (1928-2002) was a Russian conductor and composer who became almost as famous as Khachaturian; in fact, he, too, got into trouble with the government, only in Svetlanov's case it was because they said he wasn't spending enough time with the state-sponsored orchestra he led, and they fired him. The conductor made the present recording with the Bolshoi Theatre Orchestra just a year or two before he died, and one couldn't ask for more authoritative performances.

However, as a comparison, I used the EMI recording that Aram Khachaturian himself made with the LSO in 1977, coincidentally just a year or so before he, too, died. Svetlanov, as expected being the old hand he was at such things, holds his own with the composer quite nicely. Indeed, I found Svetlanov more lyrical than Khachaturian in the slower movements and almost as intense in the faster ones. What's more, even though EMI produced a recording of near-demonstration quality, the present Brilliant Classics disc holds its own as well. 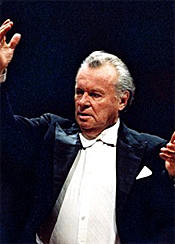 Anyway, Svetlanov performs suites from both ballets, Gayaneh containing ten selections, Spartacus five. The composer himself extracted various suites from the ballets, and conductors have been making their own selections for many years now. This one contains most of the music we would easily recognize.

In Gayaneh, the stands-outs include the Lullaby because, of course, it's anything but a traditional "lullaby"; the Adagio, famously used by director Stanley Kubrick in his movie 2001: A Space Odyssey; Lezghinka and Dance with the Tambourines, with their scintillating rhythms; and, naturally, the Sabre Dance, a genuine show-stopper. Interestingly, Khachaturian later said he never cared for the Sabre Dance, writing it in a single evening and considering it something of a joke.

While Spartacus doesn't have quite as much recognizable music in it as that of Gayaneh, it does contain much good material. It may seem surprising but the Spartacus selections offered here are actually more serene than the Gayaneh pieces. Aegina's Dance is especially entrancing, and, again, it's the Adagio that steals the show, beautifully rendered by Svetlanov and his forces.

Recorded in January, 2000, in Moscow, the sound is excellent by any standard, as transparent and dynamic as any audiophile could want. While it's a tad close, it's not so close as to be a major detriment to the music, and only the orchestral depth suffers slightly, not sounding quite as deep or as open as one could wish. There's a nicely extended high end involved, some decent bass, and good transient impact all the way around. It's clean, enjoyable sound.

Email ThisBlogThis!Share to TwitterShare to FacebookShare to Pinterest
Labels: Khachaturian