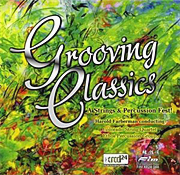 This is an odd but fascinating one. Sonically, the disc sounds better than almost anything you’ll find on CD, no surprise considering it is a fairly recent XRCD24 recording from First Impression Music, FIM, whose audiophile work has been consistently good. Yet musically, you may have to get adjusted to some of the arrangements and interpretations.

Except for the unfortunate title, Grooving Classics, which conjures up in my mind visions of John Travolta and bell-bottom trousers, we have conductor Harold Farberman’s sometimes scintillating, sometimes eccentric reworkings of famous classical music for string quartet and four-person percussion ensemble. Some of it works; some of it, well, not so much. Call it an adventure.

Things get off to a good start with the second movement Andante from Haydn’s “Surprise” Symphony. The “twinkle, twinkle little star” variation works well with a toy piano and various light percussion, joined in the “surprise” by the strings and a big timpani drum. But that’s followed by Farberman’s curious reworking of Mozart’s Eine Kleine Nachtmusik, which he so distorts as to be almost unlistenable. To each his own, I suppose. The “Can Can” from Offenbach’s Le Contes d’Hoffmann comes off well, probably because it’s rather raucous music to begin with; the popping of champagne corks (balloons, actually) adds to the fun. Then, the Adagio from Dvorak’s “New World” Symphony suffers from a peculiar combination of instruments, as do some of Tchaikovsky’s dances from the Nutcracker. 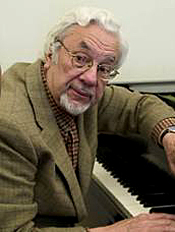 However, there are also some outstanding items on the album, among my three favorites being Strauss’s Fledermaus overture; the traditional “Red River Valley”; and with the Northwest Sinfonietta a special track of Faberman/Bizet’s “Habenera Fantasia” from Carmen. You can also find the latter two pieces on FIM Super Sounds! (XR24 066) and FIM Super Sounds! III (XR24 073). Anyway, as I say, it’s hit and miss.

Beyond questions of musical taste, however, there is nothing amiss with the sound. The production team can’t be beat: Producer Winston Ma, recording engineer Keith Johnson, and editing engineers Tam Henderson and Paul Stubblebine. Keith and Tam you may recognize as the guiding forces behind Reference Recordings. Recorded at the Richard B. Fisher Center for the Performing Arts at Bard College, New York, in 2005 and using 1/2” analog tape at 15 ips, their work results in a startlingly real sonic picture, with as extended highs and as well-controlled lows as you’ll hear anywhere. The stage dimensions are wide, the dynamics are strong, the ambient bloom is warm and natural, and the overall effect is as clean as it gets. Pick the few pieces you like best, and you have a first-rate, modern (albeit expensive) XRCD demo disc.