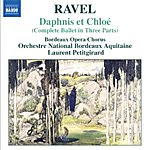 There is no doubt that Naxos produces more new recordings than any other record company, at least three or more of which I have the opportunity to hear and review each month. Most of them are competent in terms of sound and performance, but once in a while a disc stands out in one category or the other. Such is the case with this 2006 recording of Ravel's Daphnis et Chloe ballet in terms of sound.

Not that there is anything wrong with the performance. Petitgirard does a splendid job conveying the varying emotional subtleties of this pastoral Greek tale. It's just that the Naxos audio engineers have captured its sound with such a wide frequency response and such an ample dynamic range that the sonics tend to overshadow the musical interpretation. In fact, this is a clear case where a little of something, like the dynamics, may go a long way. Things start off very softly, so you can't blame the listener for wanting to turn up the volume, which would be a mistake because a few moments later the listener will be blown from his seat.

Be that as it may, the Naxos disc's main problem is that its price point, $8.99 MSRP, comes into conflict with Pierre Monteux's celebrated 1959 recording (Decca), Charles Munch's Boston account from around the same era (RCA), and Charles Dutoit's newer digital rendering (Decca), all of them now available on mid-priced releases for about $8.98-$11.98 suggested retail. Back in the days when Naxos sold for $5.99 or even $6.99, they were terrific, bargain values, especially considering they were often discounted below five bucks. These days, they sell new for close to the same cost as most mid-priced discs, and, frankly, the competition in basic repertoire items like this one is murder.

Not to take anything away from Petitgirard, but Monteux, Munch, and Dutoit are marginally more lyrical, more passionate, more exciting, and more atmospheric than he is, and they are also well recorded in their own way. So, there are always choices