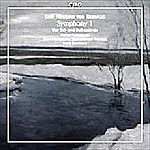 If it weren't for the overture to Donna Diana (for which I am forever grateful to Sergeant Preston of the Yukon), many of us would probably never have heard of the Austrian-born composer and conductor Emil Nikolaus von Reznicek (1860-1945). Understandably, as most of his music went in and out of even the German repertoire rather quickly.

The Symphony No. 1 is a case in point. Resnicek wrote it in the early twentieth century, Felix Weingartner first performed it in 1903, and then it quickly disappeared. It only reemerged in the 1980s, and American conductor Gordon Wright gave it its first modern performance in the early 1990s, nearly ninety years after its première. I'm not sure it deserved its luckless fate, but it is, after all, hardly a work one can call memorable.

According to the booklet note, Resnicek intended the symphony as absolute music, with nothing more to guide a listener than the subtitle "Tragic" and a fleeting reference in the first movement to a tragic hero. Yet the composer goes on, nonetheless, to provide a program for the music, so broad it could mean almost anything but indicating certain psychological progressions from tragedy to heaven-knows-what. The work opens with a kind of fate-like theme that reflects echoes of Mahler, Bruckner, even Tchaikovsky, intertwining melancholy with despair. The second movement Scherzo, however, is all busy-bee, flitting hither and yon like one of Mendelssohn's sprites. The third movement Adagio changes the tone to one of wistful longing, some of it reminding a person of a lonely forest scene. Then the Finale wraps things up with dark, nighttime landscapes and quasi nightmares.

There must be a degree of comfort for a conductor like Frank Beermann, being among the only people ever to perform the work (and one of the few people to record it), since it gives us nothing, really, with which to compare it. We'll have to take Beermann's word on how it's supposed to go. On the minus side, I found the symphony fairly conventional in style and structure, with only moments of inspiration. Fortunately, Reznicek uses some imaginative orchestration, so the piece is never actually boring. And CPO's engineers do a decent job recording it, especially the midrange and treble, which are quite transparent, if a little forward. They could have done a little more with the bass, however, because that end of things goes wanting.

Email ThisBlogThis!Share to TwitterShare to FacebookShare to Pinterest
Labels: Reznicek