Note: The following is an early review. DG will release the album April 13. 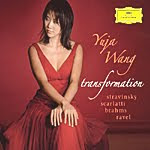 I never heard Ms. Wang's first album of solo piano pieces, an album that earned her a Grammy nomination, but if it is anything like this one, it must be quite good, and together the two discs surely mark a commendable new talent.

In an accompanying note, music critic Michael Church tells us that "Yuja Wang's title for her recording reflects the Buddhist idea that life consists of constant change." Thus, Ms. Wang presents the works of four composers whose music reflects such change. In the first place, several of the composers intended their work for a large ensemble and transformed it (transcribed it) for solo piano. More important, Ms. Wang finds in each piece of music a rationale for transformation or change: "In Brahms transforming his theme 27 times; Ravel transforming the waltz by testing it to oblivion; and Stravinsky's puppet Petrushka being temporarily transformed into a human being before finally reverting to puppethood."

I have to admit I find Ms. Wang's justifications for the disc's program a tad vague, but there is no questioning the repertoire selections themselves, which override any personal qualms about their inclusion. My only serious, if minor, concern after listening to the disc is that I found myself more or less admiring Ms. Wang's technical mastery of the piano without quite actually falling in love with the music. She is without doubt an accomplished and virtuosic player, but whether every listener will appreciate the feeling, the heart, behind her playing is another matter. While everyone will react differently to Ms. Wang's interpretations, I don't think anyone would question the fact that her pianistic skills are dazzling.

The program starts out with a bang with Igor Stravinsky's own piano transcription of three movements from his ballet Petrouchka: "Danse russe," "Chez Petrouchka," and "The Shrovetide Fair." They are mostly lightning and thunder, with some finely tuned nuances thrown in. I'm sure Ms. Wang meant them to get the show underway in the manner of overtures, with plenty of expressive animation and bravura.

Next comes the relative calm after the storm, Domenico Scarlatti's Sonata in E major, Andante comodo, a sweetly relaxed interlude before the big guns come out again, this time in the form of Johannes Brahms's twenty-seven Variations on a Theme by Paganini. Here, we're back to virtuosity and sparkling finger work. Ms. Wang maintains a proper rhythmic pulse throughout and an appropriate continuity among the assorted Variations, so the work is more of a piece than usual. The waltz is particularly charming, and the affair ends with a rousing, whirlwind flourish.

After a second Scarlatti Sonata respite, the album closes with Maurice Ravel's La Valse, transcribed for piano by the composer. La Valse is delicately spooky and sinister, always reminding me of a scene from the movie version of Stephen Vincent Benet's "The Devil and Daniel Webster," where the devil's disciples come to take their victims off to hell during a formal dance, whirling around until they're dead. I found Ms. Wang at her most affective in this piece, the subtilties of her shading quite bewitching.

I have not always considered DG's orchestral sound to my liking, but I have always enjoyed the way they've caught the sound of a piano. In fact, some of my favorite piano recordings are on DG, and this new one from Yuja Wang is no exception. The audio engineers appear to have miked the piano rather closely, yet it produces a pleasingly robust bloom, with a solid bass, an exceptionally clear and colorful midrange, and a slightly forward top end. For the kind of music making Ms. Wang engages in here--largely vigorous and stimulating--the sonics seem ideal, and if some listeners should find things a touch hard or bright, it's nonetheless probably what the actual instrument sounds like live.