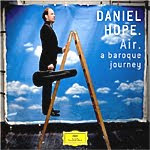 Violinist Daniel Hope and soloists from the Chamber Orchestra of Europe offer up a deliciously prepared and expertly executed selection of diverse Baroque music. The idea, says Hope in the booklet note, is to show how music from different composers and different styles is really all connected, with each of the dozen or so Baroque composers lending a little something to the others to create their unique sounds.

Hope also says the album is a way of showing off one of his favorite qualities of the violin, its "air" or ability to mimic the human voice. Hope chose all of the selections on the disc for their songlike characteristics, melodies he can play "airily," in a filmy, translucent, breezy style.

Certainly, the pieces he includes in the program demonstrate diversity, range, influence, and air, and they come to us not only from four cornerstones of Baroque music making--Bach, Handel, Pachelbel, and Telemann--but also a handful of lesser-known composers--Falconieri, Ortiz, Marini, Matteis, Westhoff, Geminiani, Valente, and Leclair. Meaning that most listeners will instantly recognize some of the music and perhaps not recognize much of the rest. Whatever the case, the disc includes some fine music, if somewhat fragmented despite Hope's desire to demonstrate their linked associations.

Let me give you a few instances: Things begin with the Ciaccona of Andrea Falconieri (1585-1656), which starts out very gently and gets more animated as it goes along, with a strong, if repetitious, forward pulse. In itself, it's a fine, demonstrative way for Hope to launch the program. Hope follows that with Handel's familiar Sarabanda, a serious piece that makes a good contrast to the Falconieri work, with Hope providing a mournful, soulful violin sound even when the music lightens up.

Following the Handel, we get the lively Ricercata segunda by Diego Ortiz (1510-1570) and then another piece by Falconieri, this time a sweet, smooth tune called, appropriately, La suave melodia.

Often, the music lifts off in flights of fancy, but mostly it remains in the lilting, yearning confines of the here and now. The little Violin Concerto in A minor by Georg Philipp Telemann (1681-1767) is a good example, parts of it deeply expressive and other parts most playful. Hope then elects to follow the Telemann with a piece by Johann Paul von Westhoff ((1656-1705) called Imitazione delle campano that is really quite modern in its tone and structure. And so on.

After a variation on Greensleeves (anon.) and several more pieces by Westhoff, Hope concludes the album with Bach's Air from the BWV 1068 Overture. What better way to end an album devoted to violin "airs" than with the most-celebrated air of them all?

As to DG's sound, it is oddly soft, veiled, and somewhat distant for so small a group of players. Nevertheless, the engineers properly integrate Hope's violin into the context of the ensemble, and the instruments themselves appear well balanced within the acoustic setting. Perhaps Hope and the audio engineers intended the low-key quality of the audio to complement the music. It is doubtless a warm, relaxing sound rather than anything one might play as demo material.