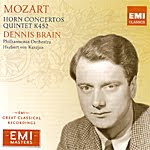 Perhaps prompted by London's "Classic Sound," the DG and Philips "Originals," or the "Penguin Classics," EMI continues to re-release some of its best old material, this time in a line called "EMI Great Classical Recordings." Remastered at Abbey Road Studios from original master tapes via the Prism SNS system (ART, Abbey Road Technology), this is a series of discs that well deserves its title. There is certainly no denying that among EMI's re-releases, there are none that do not deserve mention among the great classical recordings of the twentieth century. At mid price, they are bargains.

Which brings us to the subject at hand. No musician was ever more closely connected with a particular piece of music than Dennis Brain and the four Mozart Horn Concertos. Before this pioneering monaural set from 1953, the Concertos were only of passing interest to most classical music fans. But Brain elevated them to near-cult status, and his recording of them has been in EMI's catalogue ever since. Indeed, it may be the longest-continuing title the company has ever produced.

Of course, there are now dozens of fine recordings of the Concertos, yet Brain's interpretations remain definitive. They are graceful, effortless, relaxed, golden, honey-toned, resonant, perfectly rounded, and perfectly paced, accompanied by Herbert von Karajan at his most elegantly unobtrusive and the Philharmonia Orchestra at its height.

EMI recorded the accompanying Quintet in E-flat for Piano and Winds in 1954 with the Dennis Brain Wind Ensemble, Mr. Brain and four colleagues, including his brother Leonard on oboe. This Mozart work, too, was somewhat overlooked by listeners until Brain made people more aware of it. While it does not appear to these ears among the composer's finest pieces of music, Mozart himself was quite fond of it, saying in a letter to his father that it was "the best work I've ever completed." Admittedly, it is light and charming, the piano dominating the music but with delightful little parts for the other instruments as well, including Mr. Brain's horn.

The sound is monaural, as I say, and of no particular distinction, except that it is here remastered more smoothly and more quietly than ever. I've now owned at least four previous incarnations of these performances--on a full-price LP, a full-price CD, and I believe two mid-priced CDs before the present "Great Classical Recordings" disc--and this 2010 reissue, digitally remastered in 1997, is the best-sounding of them all (although, to be fair, it is the same mastering EMI used for their "Great Recordings of the Century" disc in 1998). In addition to the noticeable smoothness, however, there comes an apparent diminishing of high-end sheen, which may be actual or illusory depending upon what the original tape sounded like. In any event, if you don't already have these works, the newly reissued disc is well worth considering, mono or no.