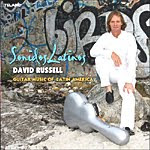 The music is ravishing. There is really little more one needs to say about it.  If you enjoy the guitar, playing or listening, you stand a good chance of enjoying this disc, which features a master guitarist playing some of the finest Latin-American guitar music ever written.

For his program, guitarist David Russell has chosen works from five famous Latin-American composers, and he organizes them by composer in the approximate order of their age. Because there are almost two dozen selections involved, I won't try to cover them all but, instead, highlight a few that caught my attention.

The recital begins with the music of Paraguayan composer Augustin Barrios Mangore (1885-1944). Of the five pieces represented, all of which I enjoyed, I played the lively "Maxixe," the hauntingly beautiful "Confesion," and the sprightly, catchy waltz "Tu Imagen" again.  And again.

Next, we have the Mexican composer Manuel Maria Ponce (1882-1948), whom the great Andres Segovia inspired to write any number of tunes. Probably the standout is "Estrellita," a melody that became so popular Jascha Heifetz made it a hit in a violin transcription. It contains hints of Robert Schumann's "Traumerei" throughout, which is always a good thing. Russell plays the piece with obvious affection.

After several works by Ponce, we find the Argentinean Hector Ayala (1914-1990), known for his tangos.  Involved here is a series of pieces he did reflecting the styles of various South American countries, Series Americana. They are all lovely, if not quite so expressive or inspiring as the music of Ponce.

Finally, we get music from the only living composer on the program, the Argentinean-American Jorge Morel (b. 1931). If you are a guitarist, you already know him.  He is a highly popular musician/composer, with over a dozen solo albums to his credit. Two of the pieces David Russell plays are ones Morel dedicated to him.  Of the five Morel pieces here, the poignant "Barcarole" stands out for me.

What's more, the sound of the guitar is as radiant as the music and the playing, the Telarc engineers recording it fairly close up. Yet it retains a warm, smooth, almost mellow quality that nicely complements the music. As I said in the beginning, ravishing.