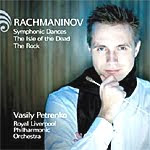 It was a gutsy move for Avie to attempt a new recording of Rachmaninov's Symphonic Dances, given that there are already several outstanding recordings available. Among previously available accounts, Andre Previn's LSO rendition on EMI has long stood the test of time, and Eiji Oue's rendering with the Minnesota Orchestra on Reference Recordings is probably on every audiophile's shelf. Nevertheless, the Royal Liverpool Philharmonic under their new, young conductor Vasily Petrenko make a good showing for themselves, and on sheer energy alone they may win the day.

Sergei Rachmaninov (1873-1943) wrote his Symphonic Dances late in life (he premiered them in 1941), initially intending them as a part of a ballet project that fell through. The three dances that remain in the suite have been in the repertoire ever since, and the public probably knows them as well as they do the composer's Second Symphony or Second and Third Piano Concertos.

Petrenko invests the first of the Dances with enormous passion, the powerful, thrusting opening section practically knocking the house down. The more hushed, meditative passages the conductor takes perhaps a bit more hurriedly than I'd like, building tremendous power and spirit in the big boisterous outer segments, while not quite reining things in enough in the more wistful themes.

The second movement Waltz is appropriately weird, a bizarre combination of Mahler and Saint-Saens, with a hint of Mussorgsky thrown in. Still, it's unmistakably Rachmaninov in the Romantic middle portion, which tries in vain to break through. This movement is also Petrenko's finest hour, as he captures well the eccentricities of the piece.

The finale, which Rachmaninov originally titled "Midnight" as part of a three-movement scheme that included "Noon" and "Evening" as the stages of progression through life, may be a reflection on Man's mortality. It's part demonic dance and part lament, with the recurring "Dies irae" theme always present. Petrenko ends it in a huge burst of pent-up energy that reminds us that his reading of the Symphonic Dances is more overtly volatile and heart-pounding than it is particularly lyrical.

Accompanying the Dances, we first find The Isle of the Dead (1906), a work Rachmaninov based on a painting he saw of the mythological Charon ferrying souls across the River Styx to the Isle of the Dead. You can guess how the composer's imagination soared, producing a tone poem of eerie, brooding magnitude, with his favorite "Dies irae" chant again a part of the plan. It's a fairly slow, gloomy affair that is only occasionally mesmerizing; however, Petrenko does his best to pull it off effectively, injecting it with all the adrenaline he can muster. Whether he succeeds or not may depend upon how well you like the music in the first place.

Finally, we get The Rock, an early orchestral fantasy from 1893, which attempts to encapsulate an entire Anton Chekov short story as well as describe the first few lines of a poem by Mikhail Lermontov. That's quite a lot, actually, for a thirteen-minute musical composition. Like The Isle of the Dead, The Rock is a rather melodramatic affair, and again Petrenko plays up the contrasting tensions, this time with a little more success.

In keeping with the vigor of the music, Avie provide the sonics with a prodigious dynamic range and impact. Recorded in 2008-09, the sound is quite clean, with very little bass overhang to cloud the midrange. I would have preferred a bit more smoothness at the top end, though, a bit more ambient bloom, and a slightly greater orchestral depth, especially in the Symphonic Dances. But I quibble; it's a fine recording, and The Isle of the Dead in particular has plenty of warmth.