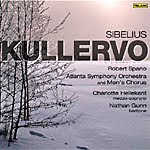 The choral symphony Kullervo (1892), which Jean Sibelius preferred to call a symphonic poem, was the composer's first large-scale work, written when he was in his mid twenties. He based the work's five episodes on the folk legends of Kullervo, a tragic hero of Finnish myth.

But after its success, Sibelius said he regretted having written it, his not wanting to be typecast as relying only on nationalistic spirit. He apparently wanted to branch out and experiment and not be pigeonholed, and thus he shelved the work for most of the rest of his life, and folks didn't publish it until after his death.

The tale of Kullervo is fairly melodramatic, beginning with a lengthy introduction recounting the character's youth, then his incestuous encounter with his sister, his going to battle, and his eventual suicide. Kullervo's misadventures make for an epic if somewhat bombastic piece of music, and it doesn't really stand up well to his later symphonies, so maybe he was right in abandoning it. Nevertheless, there are any number of felicitous moments that make the piece worthwhile, for me the section titled "Kullervo's Youth" standing out under conductor Robert Spano and his Atlanta Symphony forces.

Oddly (for this label, which is usually pretty dependable), the Telarc sound is somewhat muted, slightly soft and round and not helped by Spano's rather somber reading of most of the score. I wasn't sure at first if it were simply my ears and the lateness of the hour affecting my judgment until I put on a comparison disc, Sir Colin Davis's London Symphony account on RCA, that things became more apparent. Not only were the RCA sonics clearer and more dynamic, Davis's interpretation was more exciting, more dramatic, more incisive, and ultimately more heroic. So, I'm afraid I found this Spano account a little disappointing for the most part.