The Camerata de Lausanne is a small string orchestra of just over a dozen players, founded in 2002 by its leader, violinist Pierre Amoyal. They play with enthusiasm and virtuosity, exemplified here by their performances of Tchaikovsky’s Serenade for Strings and Souvenir of Florence.


Amoyal begins the album with the Serenade for Strings in C major, Op. 48, a piece the famously self-critical Russian composer Peter Tchaikovsky (1840-1893) wrote in 1880. Yet, despite Tchaikovsky’s self doubts about most of his music, he was quite confident about the Serenade. He thought it was one of his best works, and it is.


The Serenade is a four-movement piece, drawn up in terms of high Romanticism. Some listeners may prefer the lusher, plusher sound of a full orchestra playing the piece, but Amoyal's smaller forces have the advantage of transparency on their side. Besides, his group create a performance that closely resembles that of one of my favorite conductors and ensembles in this work, Raymond Leppard and the English Chamber Orchestra, although Amoyal takes the Elegie a tad slower and the Finale a tad quicker. But you hear the same spirit involved.


Under Amoyal the opening Andante gushes with vibrant but gentle good cheer, the composer’s lush melodies never seeming to end. The Waltz is pure Tchaikovsky, and Amoyal gives it a wonderfully lilting gait, making a graceful transition to the Elegie. Then, the slow movement goes by in a lovely, wispy fashion, perhaps not so affecting as Leppard’s version but close, with particularly smooth variations in the rhythm. Likewise, Amoyal gives us a seamless passage into the Finale, which eventually transforms into a lively Cossack dance. Although some critics consider this "light" music, Amoyal obliges one to take it seriously. 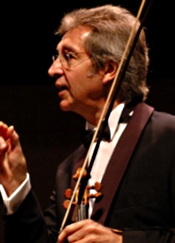 The second selection on the program is the Souvenir de Florence, Op. 70, which Tchaikovsky originally wrote for string sextet in 1890. He titled it a “Souvenir of Florence” because he composed a part of the second movement while visiting the city. We often hear this Tchaikovsky piece adapted for chamber orchestra, so the tiny Camerata de Lausanne makes nice compromise between the intended six players and the larger forces of usually several dozen or more players in a chamber orchestra.


I like what Julian Haylock writes about the Souvenir in the disc’s booklet notes: “If the String Serenade tends more towards the balletic side of Tchaikovsky’s creative psyche, the Souvenir de Florence possesses an almost symphonic sweep.” I confess I do not find the work as appealing as most other people seem to, yet I cannot deny it has its charms. I liked the way Amoyal maintains the music’s strong forward momentum, infusing the somewhat stormy first movement with a delicate tumult, the Adagio with a composed melancholy, and the final two movements with a folksy gusto and zeal. With playing of heartfelt beauty, the Camerata de Lausanne carry the day.


The recording location was Salle de Musique, La Chaux de Fonds, Switzerland; the date was May 2012; the result is outstanding. The sound is resplendent, the kind that only seems to come around about every tenth disc or so I audition. Of course, it’s a small ensemble, so we would expect the sound to be fairly transparent. Still, you’ll find no soft mushiness here, nor any bright forwardness.  It simply sounds well focused, clear, clean, dimensional, and lifelike. The perspective is a little close, true, yet not so close that the players are in your lap. With a quick transient response, strong impact, and wide dynamics, it’s a most pleasurable presentation.