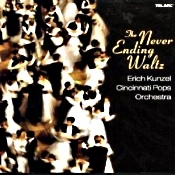 Every album seems to need a gimmick these days. With Telarc’s The Never-Ending Waltz the deal was to string together snippets of famous waltzes into a continuous fifty-odd-minute stream. Erich Kunzel and the Cincinnati Pops Orchestra play the music beautifully, of course, and, to be snide for a second, if you have an elevator in your house, it will do wonders for the ride.


As I sat listening, I couldn’t help thinking of those old “101 Strings Play the Classics” records of the 1950’s and 60’s, where they would give you about one or two minutes of every famous classical piece you could think of. The possibilities are endless, of course. With today’s writable CD’s, DVD’s, Blu-rays, MP3’s and all, people could take their own favorite Beethoven symphony movements and create their own new symphony. Let’s see, the first movement of the Sixth, the slow movement of the Fifth, the Scherzo from the Seventh, and maybe a big finale with the ending of the Ninth.


There is a method to this collection of excerpts from Kunzel and the Pops, though: While they play the music without interruption, they actually divide it into eight categories. They devote the first nine minutes or so to the waltzes of Johann Strauss, Jr.; then the next section, called “Vienna Waltzes,” includes music by Lanner, Ivanovici, Lehar, etc.; followed by “Operetta Waltzes,” “Opera Waltzes,” “Waldteufel Waltzes,” “Concert Waltzes,” “Ballet Waltzes,” and, finally, “Tchaikovsky Waltzes.” So, Kunzel and his crew do cover the field. And, to be fair, the album does make for wonderful background music. The Cincinnati Pops play with a full, lush smoothness that is quite fetching, and Kunzel does have the measure of the music. 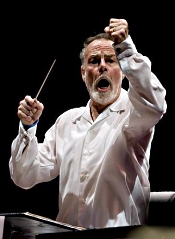 If it’s only lovely snippets of musical wallpaper you’re after, this album serves its purpose. Besides, who can tell, maybe it will encourage fledgling classical fans to buy complete sets of the material this album includes. Indeed, what the disc did best for me was make me want to listen to the original tunes in their entirety.


Telarc released the disc in 2006, and the sound is good, as we have come to expect from this source, especially in its imaging and its sweet ambient bloom. Still, it seemed just a touch softer to me, more slightly vague and muffled, than Telarc’s best stuff. Maybe I was just in a bad mood when I did my listening, or maybe I had my ears plugged up from a summer allergy. Who knows. Or maybe it was that the music appeared to me more lightweight than usual from Kunzel, and it influenced how I heard it. The album has no doubt sold a ton of copies in its time, and for its kind, the disc more than adequately fulfills its goals.


To listen to several brief excerpts from this album, click here: