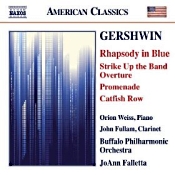 Let me begin by saying that I haven’t heard any interpretation of Gershwin’s Rhapsody in Blue I like better than the one I grew up with, Leonard Bernstein’s 1959 rendering with the Columbia Symphony Orchestra. It’s a recording I’ve liked so much, I’ve owned it on a variety of Columbia, CBS, and Sony discs, culminating a few years ago in my buying the Blu-Spec edition from Sony Japan. This is all by way of saying that no matter how good pianist Orion Weiss, conductor JoAnn Falletta, and the Buffalo Philharmonic play the piece, it doesn’t quite match the animation and potency of the Bernstein version. That said, Weiss, Falletta, and crew still play it darn well.


As you probably know, it was bandleader Paul Whiteman who persuaded a brash, young George Gershwin (1898-1937) to write a jazz-inflected showpiece for him and his orchestra. When Gershwin initially declined, saying he didn’t know enough about orchestration to do the work justice, Whiteman assured him that he could get Ferde Grofe to arrange it for piano and orchestra. That was 1924, Gershwin’s classical jazz became a new musical phenomenon, and the rest is history.


On this Naxos disc, we get a deep, sultry treatment of the score. While it doesn’t have the sometimes eccentrically paced spontaneity of Bernstein’s interpretation or the sheer energy of Gershwin’s own piano-roll rendition (re-recorded with Michael Tilson Thomas), this new Naxos performance does display a graceful spirit and an appropriately bluesy manner. Also, I have to admit that Orion Weiss plays a mean piano, at the same time applying a very smooth, very delicate touch on the keys, making his interpretation a charming study in contrasts. And when Gershwin’s big, lush main theme kicks in, the whole thing is, well, a kick. 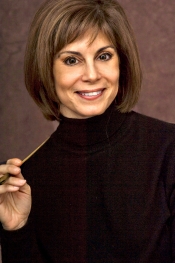 Nevertheless, no, in the end I wouldn’t necessarily buy this disc just for the Rhapsody. Weiss’s reading may be fluid and flowing, but it lacks the idiosyncrasies of tempo and rhythm that elevate Bernstein’s rendition over almost all competitors. Sometimes being overenthusiastic works. However, I would seriously consider the Naxos album when you look at the accompanying material. The Overture to the Broadway show Strike Up the Band makes a terrific curtain raiser and a great introduction to Gershwin’s style. Promenade, a piece of film music reconstructed by George Gershwin’s brother Ira, is brief, snappy, and dapper. And Catfish Row, Gershwin’s concert suite from Porgy and Bess (restored by composer Steven Bower), includes many of the opera’s most-famous and colorful tunes. Ms. Falletta and her Buffalo players provide all of this music with the jazzy, folksy sophistication it needs. If you liked Falletta’s earlier Gershwin disc, you will no doubt like this one as well. She and her fellow musicians have a good feeling for the orchestral jazz idiom Gershwin perfected so well.


Naxos recorded the music at Kleinhans Music Hall, Buffalo, New York in 2010 (Rhapsody in Blue and Promenade) and 2012 (Strike Up the Band and Catfish Row). Although the sound is a trifle on the warm, round, plushy soft side, the piano and orchestra show up nicely, and the wide dynamic range helps the sonics to pop. There’s a wide frequency range, too, with a satisfyingly extended treble and an occasionally thunderous bass, so even if the midrange transparency is mite too thick to be entirely transparent, the overall effect is natural and lifelike enough.