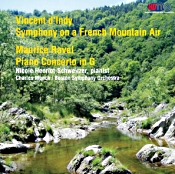 It’s always a pleasure to listen to a disc remastered by HDTT (High Definition Tape Transfers): You can depend upon a classic performance not generally available on CD and a splendid remastering job. If you recall, the folks at HDTT remaster older recordings from tapes and LPs in the public domain, make them sound better than they’ve ever sounded before, and offer them to the public burned to various formats (FLAC, DXD, DSD, HQCD, HDCD, etc.). You can hardly ask for more.


In the present instance, HDTT have remastered an old favorite of mine, The Symphony on a French Mountain Air (Symphonie sur un chant montagnard français), Op. 25, by Vincent d’Indy in an RCA recording by pianist Nicole Henriot-Schweitzer, conductor Charles Munch, and the Boston Symphony Orchestra. Munch’s performance is maybe the first time I ever heard this music, and it’s still the performance I most cherish, so to say I welcome this new edition is an understatement. Along with it, the same forces perform Ravel’s Piano Concerto in G major.


Composers have long shown interest in mountains, especially the Romantics with their obsessive regard for Nature and some modernists with their concerns for the mystical. Thus, we’ve gotten Liszt’s Mountain Symphony, Grieg’s Hall of the Mountain King, Mussorgsky’s Night on the Bare Mountain, Strauss’s Alpine Symphony, Raff’s In the Alps, Hill’s The Sacred Mountain, Hovhaness’s Mysterious Mountain, and so on. French composer Vincent d’Indy (1851-1931) wrote his Symphony on a French Mountain Air in 1886, using a folk melody he heard in the Cévennes mountains as a primary theme (thus, the work's alternative title, Symphonie cévenole). He initially planned the work as a fantasia for piano and orchestra, although the piano part never dominates, and some critics have even labeled it a sinfonia concertante, a mixture of symphony and concerto. Like most concertos, it’s fairly brief at under half an hour and contains three movements.


D’Indy didn’t write a lot of material that people listen to anymore beyond the Symphonie cévenole, and the fact is, with no disrespect, he may have lucked into the principal tune. Be that as it may, the Boston players seem fully attune to all the charmingly bucolic nuances of the Symphony, and Ms. Henriot-Schweitzer contributes a most-sympathetic piano part. There is a gentleness about the performance that is both poignant and striking, yet when the score requires its few big, showy moments, as in the animated final movement, Munch and his crew are well up to the task. With playing this sharp and instrumentalists this much on their toes, it's no wonder the performance continues to lead the field. 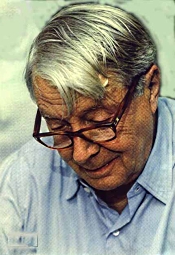 The disc’s companion piece is the jazz-inflected Piano Concerto in G major (1931) by French composer Maurice Ravel (1875-1937). Here, the situation is a bit different from the d’Indy; while there is little competition from rival d’Indy recordings (Dutoit and Plasson aside), there is formidable competition in the Ravel field. In particular, it’s hard to find anything that matches the brilliant performance by Arturo Benedetti Michelangeli, Ettore Gracis, and the Philharmonia Orchestra on EMI. Nevertheless, Ms. Henriot-Schweitzer's performance of the Concerto is energetically fluid while remaining free of any overtly idiosyncratic mannerisms. She and Munch seem of a single mind and purpose in communicating the work's bluesy-jazzy contrasts and its lyrical Adagio in an entirely unforced manner. The whole work comes across in a more-unified style than one sometimes hears it. So, while it's perhaps not as characterful or purely magical as Michelangeli's interpretation, it's quite good, especially that dreamy slow movement.


RCA’s celebrated recording team of producer Richard Mohr and engineer Lewis Layton recorded the music at Boston’s Symphony Hall in 1958, and HDTT remastered it from an RCA LP (LSC 2271) in 2013. To say they did a good job would be putting it mildly. With the judicious application of a little noise reduction, these Fifties recordings sound almost dead quiet even in softer passages. More important, the sonics are clear and clean, demonstrating the kind of transparency that most of us admire in the old RCA "Living Stereo" series. What's more, the clarity does not come with any undue brightness, forwardness, or edginess. The sound is generally smooth and natural, with fine stereo spread, separation, depth, and air. When the piano enters, the miking places it in a well-integrated position just in front of the orchestra but not way out in front or stretching from speaker to speaker. The aural presentation sounds as well focused, dynamic, and realistic as one could want.


For further information on the various formats, configurations, blank HQCD discs, and prices of HDTT products, you can visit their Web site at http://www.highdeftapetransfers.com/storefront.php.

Email ThisBlogThis!Share to TwitterShare to FacebookShare to Pinterest
Labels: D'Indy