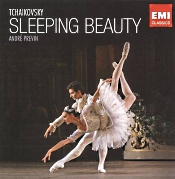 Russian composer Peter Tchaikovsky (1840-1893) wrote the second of his big ballets, The Sleeping Beauty, in 1889 and premiered it in 1890. Unfortunately for the composer, while the ballet would go on to become one of his most-loved items, he wouldn’t live long enough to see it attain its ultimate popularity. It seems a shame, given how much self-doubt Tchaikovsky always had and with what little regard he held most of his own work. The Sleeping Beauty also enjoys the distinction of being the longest piece of music Tchaikovsky composed, usually abbreviated as it is here. (EMI’s packaging assures us it is “complete,” but they cut it by several minutes.)

Anyway, when Angel Records (EMI’s subsidiary classical label in America at the time) first released this 1974 recording on LP, it was both a blessing and a chore. The blessing: When Previn recorded it, it went immediately to the top of my recommendations for the work (on vinyl). Subsequently, I noticed its appearance on other lists as a top contender, including High Fidelity magazine's "Record Riches of a Quarter-Century," Gramophone magazine's "Recommended Recordings," the Penguin Guide’s recommended listings, etc. The “chore” I’ll come to.

Tchaikovsky’s music is a nonstop flow of inspired melodies, both graceful and dramatic. Previn’s performance is at once exciting, subtle, enchanting, and lovely. Unlike many other, higher powered productions, Previn's reading brings a true fairy-tale richness and delicacy to the score.

But that chore: The sound on the American-issued LP seemed a little dull and constricted, and the recording took many years finally to show up on CD. When it did appear on silver disc, the company packaged it in a hard cardboard long-box, with a plastic tray insert that held two separate jewel cases and a lavishly illustrated, twelve-inch story booklet, obviously meant for children. The box itself, clearly intended as a gift set, would not even fit on an ordinary CD shelf. Happily, EMI rectified the former sins of their Angel subsidiary and the initial goofy CD packaging by issuing the complete Previn Sleeping Beauty in 2004 in a two-disc, slimline jewel box with proper notes and a budget price. And the EMI sound, like almost all of producer Christopher Bishop and engineer Christopher Parker's collaborations, is first-rate. In 2009 they re-released it in the pictured box at an even better price. The combination is unbeatable.

What’s more, although the new packaging indicates that the mastering is the same one they had done a decade earlier (“Digital remastering 1993 by EMI Records Ltd.”), it sounds to me somewhat different. The newer version seems very slightly brighter, cleaner, clearer, and more open by comparison to the older mastering.  I can only account for this in one of two ways: Either (1) EMI touched up the new mastering without telling anybody; or (2) I was hearing the differences among my three CD players (two Sony’s and a Yamaha), even though I kept changing out the discs every few minutes. Whatever, the set is still the best recommendation I can make for this piece, and EMI offer it at a price that’s still unbeatable.