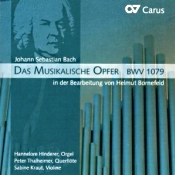 So, what was the occasion for an arrangement of Bach’s Musical Offering (Das Musikalische Opfer, BWV 1079) for flute, violin, and organ? Well, actually, it’s unclear for exactly what instruments Bach originally intended the work. Indeed, the composer himself wrote out the Trio Sonata for flute, violin, and basso continuo, writing the other sections possibly for solo fortepiano, although small chamber ensembles often handle the canons these days. It was the dedication of a new choir organ at the Stadtkirche Schorndorf, Germany, in 1976 that brought about the new arrangement by the instrument’s designer, Helmut Bornefeld. On the present, 2013 album, the Stadtkirche’s current organist, Hannelore Hinderer, flutist Peter Thalheimer, and violinist Sabine Kraut perform the work.


As you may know, The Musical Offering is a set of fugues and canons and such that Bach based on a musical theme King Frederick II of Prussia gave him. It came about during a meeting between Bach and Frederick in 1747, the meeting taking place because Frederick employed Bach's son C.P.E. Bach as a court musician. Frederick wanted to show off a new musical instrument, the fortepiano, which he had recently obtained. The King challenged Bach to improvise a six-voice fugue on a theme he gave him, which, eventually, Bach did, about two months afterward presenting the king with his “musical offering,” later publishing the variations as the set we now know.


The arrangement for flute, violin, and organ works well enough, although I wouldn’t want it as an only recording of the work. The arrangement provides variety by including some movements for solo organ, some for flute and violin only, and some for all three instruments. And, certainly, the three performers in the work do their job supremely well. Above all, they appear to enjoy the music and enjoy playing it. Their responsiveness carries over to the listener.


In addition to the Stadtkirche organ, the performers use a wooden Boehm flute and a period violin with gut strings and baroque bow. It’s a valuable combination of instruments that probably would have pleased and impressed Bach. 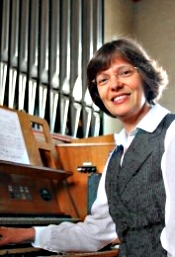 However, despite the best intentions of arranger Bornefeld and the enthusiastic performances of Hinderer, Thalheimer, and Kraut, it remains the Sonata sopr’il Soggetto Reale that Bach originally wrote for a keyboard, flute, and violin trio that stands out in the set. Although here, again, it’s hard to tell which keyboard instrument Bach proposed for the basso continuo--harpsichord, fortepiano, or organ. (Scholars are also uncertain as to Bach’s order for the music as well as the instrumentation, except the Trio, and also debate the meaning of the various puzzles the composer worked into the score, but that’s another story.) The present arrangement places the Trio in the penultimate position, followed by a concluding six-part Ricercar on organ.


Whatever, the four-part Trio shines as the centerpiece of The Musical Offering. With Hinderer, Thalheimer, and Kraut giving it their best, the music sounds most graceful, beautifully flowing, harmonious, melodious, and wonderfully realized all the way around. It is spectacularly good.


If there is any drawback to the disc, it’s that it contains only about fifty-one minutes of music. Of course, as I’ve often said, it’s the quality and not the quantity that counts. Therefore, if you enjoy Bach’s Musical Offering, you get your money’s worth.


Carus-Verlag recorded Bach’s Musical Offering at Stadtkirche Schorndorf in May, 2012. The organ solos sound sweet with their resonant church acoustics, yet remain clear and ultra clean, with a rich lower register. The duets sound realistic enough, with a moderate distance between the players, especially so with the organ, and a lifelike separation between the flute and violin.  In the trios the instruments stand clearly apart while sounding well integrated as a whole. The perspective makes them loom a little large, giving the music an added dimension and weight. Overall, the sonics are broad, warm, and sonorous.