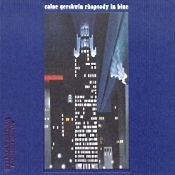 With his Rhapsody in Blue composer and pianist George Gershwin (1898-1937) began a trend in classical music to infuse serious orchestral works with serious jazz. So it’s not a stretch to take several of the man’s compositions back to their roots with performances by a small jazz group, in this case the Uri Caine Ensemble: Uri Caine, piano; Ralph Alessi, trumpet; Jim Black, drums; Joyce Hammann, violin; Mark Helias, bass; Chris Speed, clarinet and tenor sax; and Theo Bleckmann and Barbara Walker, vocals. The results we hear on this all-Gershwin album of instrumental and vocal numbers are different but highly appealing.


More important, Uri Caine is a jazz and classical pianist and composer. Among his sixteen record albums include a 1997 jazz tribute to Gustav Mahler that received an award from the German Mahler Society; a 2009 album called The Othello Syndrome that earned a Grammy nomination for Best Classical Crossover Album; and reworkings of Bach's Goldberg Variations, Beethoven's Diabelli Variations, and various Wagner, Schumann and Mozart selections. In 2005, the Los Angeles Chamber Orchestra named him their Composer-in-Residence through the 2008–2009 season. Yes, he knows what he’s up to.


If, like me, you grew up knowing and loving the full orchestral version of the Rhapsody, or even if you’ve gotten used to a smaller-scale rendition (Gershwin wrote the piece for the smallish Paul Whiteman band), you may find the Caine Ensemble’s jazz arrangement a bit unsettling. Like anything, it takes a little getting used to. Whether that happens or not, however, is problematic. My mother always told me I’d come to love Brussel sprouts if I just ate enough of them; to this day they make me gag. Although Caine’s jazz adaptation clearly didn’t make me gag, I don’t think I’d want to hear it too often without a dose of Bernstein and the Columbia Symphony Orchestra thrown in more often than not.


The ensemble perform the Rhapsody first on the program, and, as I say, it may come as a shock to classical listeners not used to jazz. I mean, the Uri Caine Ensemble play the piece very jazzy, with some obvious riffs and improvisations but nothing that really disturbs Gershwin's original intentions. Each instrument, particularly the clarinet and piano, gets its fair share of the spotlight (it is Caine's group, after all, and he's the pianist). This is an enterprising new way to listen to an old favorite that never sacrifices the composer's intentions or the spirit of the music. Rather than hearing a jazz-infused classical Rhapsody, we hear a classical-infused jazz Rhapsody. While it might not appeal to everyone, especially old-time, die-hard classical fans, if you can keep an open mind, it is quite fetching. I loved it. 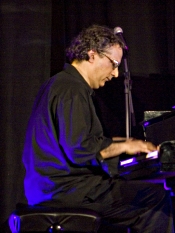 In order for the Rhapsody to work effectively, though, the musicians must be virtuosos in their own right and show the utmost respect for the music. Here, the Caine Ensemble excel, performing the work with consummate skill, innovation, creativity, and musicianship.


After the Rhapsody in Blue we get a series of eight Gershwin vocal and instrumental numbers done by vocalists Theo Bleckman and Barbara Walker, with the Caine Ensemble. The performers infuse these tunes, too, with some new twists, although it's all mostly recognizable as traditional Gershwin. The selections include "But Not for Me," "Let's Call the Whole Thing Off," "I Got Rhythm," "I've Got a Crush on You," a slightly bizarre "They Can't Take That Away from Me," "Slap That Bass," a sort of spacey "Love Is Here to Stay," and "How Long Has This Been Going On." Good singing, good playing, good backup, lively, sympathetic style--it works for a delightful good time.


It will please audiophiles to know that in December 2012 at Avatar Studios, New York, engineer Ron Saint Germain recorded the music directly to half-inch, two-track analogue tape with no manipulation or digital processing. Yes, I said analogue tape. The sound is fully up to audiophile standards, rich and lush, yet wonderfully well defined, with a healthy amount of air around the instruments. Most important, there's a sonic impact that reminds one of being at a live event and a frequency range that puts one in the audience. Play it loud, and it only gets better, with every subtlety of every instrument clearly, naturally delineated and voices as clean as real life.


A final word, this about the packaging: The disc comes in a clothbound Digipak-type case, with a picture and info glued to the front and back. It’s really quite attractive. All well and good; then, inside you’ll find a booklet of the foldout-map variety that stretches to nearly two feet. Very inconvenient for trying to read comfortably. Otherwise, a classy affair.