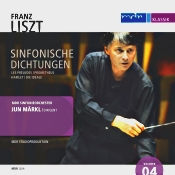 Program music (music that tells a story, represents a scene, or illustrates a point) has been around for a long time. Vivaldi (The Four Seasons), Beethoven (Pastoral Symphony, Wellington’s Victory), and Berlioz (Symphonie fantastique) all practiced and extended the range of such descriptive music. But critics generally agree it was Hungarian composer, pianist, conductor, and teacher Franz Liszt (1811-1886) who first applied the term “symphonic poem” to the genre of short narrative compositions he wrote and who certainly popularized the tone poem as we know it today. Maestro Jun Markl and the MDR Symphony Orchestra (Central German Radio Symphony, of which he was Principal Conductor from 2007-2012) here present Volume 4 of what I assume is their survey of Liszt’s complete symphonic poems. Oddly, however, I could not find anything about the first three volumes. Who knows: Maybe Markl is planning ahead by starting with Volume 4.


Anyway, the album contains four of Liszt’s symphonic poems, beginning with Prometheus, written in 1850 and revised in 1855. Liszt said he wasn't trying to retell the Prometheus legend but, rather, to create a series of moods related to the myth. Thus, we get music of a serious, contemplative, often bleak nature, with a dark, cloudy introduction and a series of melodramatic climaxes. That's just the way Markl presents it, although he may tame the dramatics just a bit, preferring a smoother, more sophisticated treatment of the story than some other conductors have given us. He never rushes the music but creates atmosphere at a relaxed but invigorating pace.


And so it goes throughout the program's other three tone poems. Under Markl, Les Preludes has a more studied feeling to it than an overtly exciting one as, say, Georg Solti offered in his London Philharmonic account (Decca). Les Preludes, premiered in 1854, may be familiar to different people for different reasons, by the way. The Nazis used it during the Second World War for propaganda purposes, forever clouding its appreciation for many listeners. For me, though, it will always represent the theme music for the old Buster Crabbe Flash Gordon serials of the Thirties. Thus, freed of any devious war connotations, the music has simply sounded thrilling and triumphant, a forerunner of John Williams's Star Wars and Indiana Jones material. Again, I like the way Markl allows the score to unfold at an unhurried pace, even if I miss some of the sense of urgency conveyed by the aforementioned Solti performance, as well as by Bernard Haitink, who may have provided the best of all worlds in his Philips recording, also with the LPO. 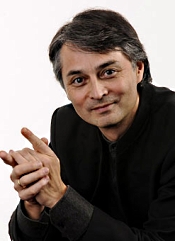 Next up is Hamlet, which Liszt wrote in 1858 and, of course, based on Shakespeare’s play. Liszt gave the character of Hamlet two distinct themes to represent the young man's indecisive nature: one theme slow and brooding, the other vigorous and volatile. Markl seems most successful here in clearly differentiating the two sides of the man. Liszt gives over the middle part of the poem to Ophelia, and, appropriately, Markl handles it as gently as possible. Despite the conductor making the music appear more drawn-out than usual, he turns in what is probably the best, most-characterful symphonic poem on the disc.


The final work on the program is for me the least interesting musically, though in some ways it’s the most ambitious. Liszt wrote Die Ideale in 1857 as a tribute to the German poet and philosopher Friedrich von Schiller, naming the piece after a Schiller poem of the same title. The composer divides the music into several parts, representing the general ideals of the poem: aspiration, struggle, achievement, fulfillment, and triumph. The music has always seemed a little long-winded to me, and Markl does it no favors with his kid-gloves treatment. While he clarifies every nuance of the music in some detail, he seems more preoccupied with precision and execution than in feeling, emotion, except in momentary spurts. Be that as it may, if you like this particular Liszt tone poem, you could do worse. At least Markl doesn't try to glorify the music or make it seem more grandiose than it is. If anything, his intellectualizing of it makes it all the more appealing, even to a doubter like me.


MDR Klassik made the recording in the main auditorium of the Leipzig MDR Studio on Augustus Platz in February 2011. The sound is very big, moderately close, and quite wide. Yet it also displays decent depth, air, and ambience, so it isn't particularly unnatural in its presentation. Good midrange clarity, reasonable frequency extensions, and a modest dynamic range also help in making the music come alive. No complaints here; it's actually some of the better sound you'll find in this music.