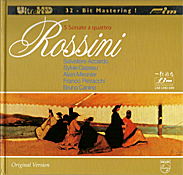 This remastered Philips album from FIM is notable for several reasons: First, it provides five of the six sonatas that Rossini wrote when he was only twelve years old. Second, it presents them in their original arrangements for string quartet rather than for a larger string ensemble as we sometimes hear them. Third, violinist Salvatore Accardo and his friends give them most-elegant interpretations. And, fourth, the folks at FIM (First Impression Music) have afforded the recording the most-beautiful audiophile sound one could imagine. Let me touch further upon each of these items.

Gioacchino Rossini (1792-1868) wrote his six Sonatas for two violins, cello and double-bass in 1804, and scholars only discovered them in the Library of Congress after World War II. Most often, we hear them in their transcriptions for small string orchestra, but it's especially nice to hear them as the original scores arrange them, for string quartet. Almost as remarkable as the young prodigy composing these works at so early an age is that after Rossini wrote thirty-eight operas by the age of thirty-eight, he pretty much retired, writing only a few occasional pieces of music during the next thirty-odd years. Apparently, he spent much of his time in retirement as a gourmet, portraits of his girth in later years attesting to the fact.

In any case, his youthful Sonatas all follow the same basic pattern: They start with relatively long opening Allegros, followed by brief central slow movements, and concluding with moderately quick-paced finales of modest duration. My favorite among them, for what it's worth, is No. 5 because it sums up everything good about the music; it's both delicately enchanting and playfully witty by turns.

The performances by Salvatore Accardo, first violin, Sylvie Gazeau, second violin, Alain Meunier, cello, and Franco Petracchi, double bass is as sweet, melodious, refined, exacting, and flexible as a listener will find anywhere. This is virtuosic playing that is completely at the service of the music: graceful, lilting, and lyrical, yet jaunty and lively when necessary. I have heard the Sonatas played by a number of different performers and groups over the years, but none surpass Accardo and his colleagues.

To remaster this 1978 Philips recording, FIM used their newest replication format, a process they call UltraHD. According to them, "Ultra High Definition 32-bit mastering is a proprietary ultra-high quality mastering system, jointly developed by two companies: Five Four Productions and First Impression Music. With this leading-edge system, our aspiration is to achieve unprecedented sonority and musicality reproducing as closely as possible the sound of the original master tape."

By the sound of this disc, I'd say they succeeded beyond expectation. The sonics are ultra smooth, with no sign of strain, edge, or harshness.  Imaging across the soundstage is excellent, with enough air around the instruments to feel their placement with precision. Dynamic contrasts sound taut yet subtle, and typical of Philips the acoustic is warmly rich and lightly resonant. It's one of the most-agreeable listening experiences a person could imagine.

FIM's packaging continues to impress me as well. They use a hardbound album approach, opening like a book, with about thirty pages of information inside, followed by a fastened black-paper sleeve into which fits a static-free inner envelope holding the disc. Moreover, the glossy hardcover front and back are beautifully illustrated. It's a class act all the way around, but I would caution it's one for which the buyer will pay a deserved premium price.