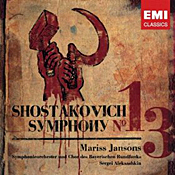 Basing his 1962 Symphony No. 13 in B-flat minor"Babi Yar" on a series of poems published by Yevgeny Yevtushenko the year before, Russian composer Dimitri Shostakovich (1906-1975) designed the five movements of the work mainly to deplore Russia's anti-Semitism. He recalls everything from the massacre of several tens of thousands of minorities in Bielostok in 1905 to the killing of untold numbers of Jews, Russians, and Ukrainians by Nazis and Russian collaborators in the valley of Babi Yar during the Second World War (considered the largest single massacre in the history of the Holocaust).

In addition to the subject of the Jewish issue in the USSR, the poems also reflect the question of how Russia was dealing in 1962 with past crimes against all of its own people. Shostakovich presents these tragedies to the listener in huge, almost overwhelmingly somber tones, and any conductor's approach to them must be straightforward and dead serious. The words and sound are enough to convey the spirit and intent of the piece.

Maestro Mariss Jansons and the Bavarian Radio Symphony Orchestra and Chorus communicate well the sorrow and anguish of the work, as does the soloist, Sergei Aleksashkin. Just don't expect a conventional symphony if you haven't heard it before. Three of the work's five movements are Adagios, meaning that most of the music is slow and in this case appropriately gloomy, with only a hint of light in the final movement. Nor does the work hold up as a conventional symphony in structure, as the composer based each movement on a separate poem, supported by soloist and chorus. So the work is really a series of choral-vocal-orchestral tone poems closely enough connected for one to call it a symphony. But call it what you may, it is undeniably a powerful piece of music and a powerful political statement.

EMI engineers provide the work with a suitably dark yet detailed sonic atmosphere that appears a little narrow to my ears and a tad thick and soft. Other than that, the soloist sounds quite natural, and the mid bass is especially dynamic. The only "however" in the affair is that EMI also offer an alternative recording of the work in a mid-priced two-pack along with the Tenth Symphony, made about twenty years earlier by Andre Previn and the LSO in a slightly wider, more open, and more clearly defined acoustic. To my mind, the Previn is the better bargain, but I cannot say I disapprove of this Jansons entry, either.