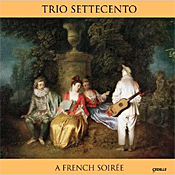 My Random House Dictionary defines a "soiree" as "an evening party or social gathering, esp. one held for a particular purpose; e.g., a musical soiree." A French Soiree follows Trio Settecento's previous successes with Cedille, An Italian Sojourn and A German Bouquet (http://classicalcandor.blogspot.com/2009/10/german-bouquet-cd-review.html) in providing more light Baroque music from across the globe. In coming releases as the Trio proceed through more European and perhaps world music, they may begin having trouble coming up with clever album titles, but it's a risk I'm willing to endure. Their playing is first-rate, and their discs sound superb.

As the title suggests, what we get here is a collection of short, light French works by seventeenth and early eighteenth-century composers like Lully, Couperin, Marais, Rebel, Rameau, and Leclair. Performed on period instruments in the most-elegant possible manner, the music close to irresistible.

The program begins with a series of divertissements, a suite of little chamber pieces featuring the music of three French composers: Jean-Baptiste Lully (1632-1687), Francois Couperin (1668-1733), and Marin Marais (1656-1728). The suite is just over twenty-nine minutes long and contains eleven tracks, all of them elegant and refined, both the music and the playing. Of course, the music is also fairly rich and flowery, so the Trio's use of instruments suited to the period helps in bringing out the vibrant, resonant tone of the pieces.

Next, we get Couperin's Troisieme Concert, six brief dance movements. The Trio handle them imaginatively, presenting them in lively yet courtly fashion.

Following the Couperin is the Sonate Huitieme en Re mineur by Jean-Fery Rebel (1666-1747), probably the least known composer on the program. However, it is his piece that stands out as the most unique of the bunch for its combination of ruggedness, grace, and lilting melodies.

The program ends with the Quatrieme Concert by Jean-Philippe Rameau (1783-1764) and the Sonata en Sol majeur by Jean-Marie Leclair (1697-1764). Like the other works on the disc, the music impresses one with its civility and urbaneness, the performances with their culture and polish.

If I have any reservation at all, it's that I don't find the music of the French Baroque composers as varied or as tuneful as that of their Italian and German counterparts. Thus, I probably didn't appreciate this album as much as I liked the Trio Settecento's previous releases. No fault of theirs.

Cedille recorded the program in Nichols Concert Hall at the Music Institute of Chicago, Evanston, Illinois, in August of 2010. They obtained typically audiophile results, although the sonics seem a bit closer than usual. Not many record companies are producing this kind of high-fidelity response anymore, Cedille, certainly, and Reference Recordings, but precious few others.

Anyway, here we get truthful presentations of all three instruments, with extraordinary definition and detail, the instruments themselves meshing nicely and providing a satisfyingly unified sound. Be sure to experiment for a moment to get the volume just right, though, for optimum realism. Too soft and it will appear a bit dull; too loud and it will appear a tad bright. At its prime output, however, it should sound as lifelike as you'll likely hear anywhere outside a concert stage.