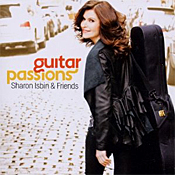 American guitarist Sharon Isbin has obviously been playing classical guitar a lot longer than I thought. Maybe she just looks younger than she is. In any case, Ms. Isbin was a student of such distinguished mentors as Alirio Díaz, Oscar Ghiglia, Aldo Minella, Andrés Segovia, and Rosalyn Tureck; she received her Master of Music degree from the Yale School of Music; she has been a successful recording artist since the 1980's; she has appeared with a multitude of orchestras around the world; she has received numerous awards; and she founded the Guitar Department at the Juilliard School. Phew! No wonder she makes good albums.

Some of the disc's twelve tracks will be familiar to any fan of the guitar--works by Rodrigo, Albeniz, etc.--while others may be less well known, with several of them getting world-première recordings. On all but three of the selections Ms. Isbin's friends join her in duets, trios, and more, making all of the music seem a little different. It's light, enjoyable fare.

After those pieces, Ms. Isbin takes it alone through Isaac Albeniz's "Asturias," very colorful, very emotional, very tuneful. Between the Rodrigo and Albeniz works, we get some of the high points of all twentieth-century guitar music.

And so it goes, with a world-première recording of "Dreamboat Annie," the vocals by Heart's Nancy Wilson, and then a moving solo from Isbin by Ariel Ramirez called "Alfonsina y el mar." Moving on, we find more première recordings: Antonio Carlos Jobim's "Chovendo non rosiera" from Isbin and Lubambo; and Alfredo Vianna's "Carinhoso" from Isbin and most of the friends mentioned above.

The album draws near the end with the rain-forest evocations of Gaudencio Thiago de Mello's "O Presidente," which de Mello dedicated to Ms. Isbin on this première recording with de Mello on organic percussion. And things conclude with two movements from Agustin Barrios Mangore's "La Catedral," done by Isbin alone.

If I have any concern about the disc, it's minor; namely, that there is less than an hour of music involved. The program is over before you know it, making you wish for more.

Recorded by Sony in 2010 and 2011 at Kaufman Studios, New York City, and Threshold Sound, Santa Monica, California, the sonics are very close-up in the manner of a typical pop album. This produces a rich, warm, lush, and vibrant response, one that puts the listener pretty much at the feet of the performers. Had I been one of the audio engineers, I would have opted for a bit more space to simulate a more-realistic concert-like setting, but that was not what the engineers were after. They apparently wanted a big, clearly etched, strongly defined sound, and they got it. I doubt that it will disappoint anyone.