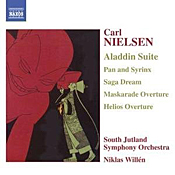 One is not apt to think much beyond the symphonies of Danish composer Carl August Nielsen (1865-1931) when considering the man's output, and it hasn't helped that so few record companies have recorded his shorter orchestral works. I recall an old EMI Greensleeve LP with Herbert Blomstedt that I used to own, and I believe there is currently a DG recording with Neeme Jarvi, and several others; but it isn't much, so this budget-priced Naxos disc from Niklas Willen and the South Jutland Symphony Orchestra fills a much-needed hole in the repertoire.

There are six separate selections on the album, all of them essentially brief tone poems. Things begin with the Aladdin Suite, seven movements the composer took from his incidental theater music. Don't expect anything so remarkable as Rimsky-Korsakov's Scheherazade, but do expect these pieces to entertain you with their lavish orchestrations, their inventive dances, and in one composition, "The Marketplace in Ispahan," their uniqueness as the composer tries to imitate the varied sounds of a bazaar, the sounds coming from all directions. I couldn't help wondering while I was listening to this music how it might have sounded in a surround format.

Next are Cupid and the Poet, Saga-Dream, the Helios Overture, and two segments from the opera Maskarade, the Overture and the Prelude to Act II. These pieces amply demonstrate Nielsen's ability to evoke atmosphere and mood, which Willen nicely amplifies. The most intriguing of all the little works, though, is the concluding one, Pan and Syrinx. It's a pastoral piece, mostly sweet and relaxed, at least under Willen, becoming more vivacious as it goes along, then fading off into silence. It's quite affecting, really.

Evaluating a disc's sound can always be problematic. My initial reaction upon hearing the disc's opening "Festival March" from Aladdin was that the sonics were too thick and heavy. But I had just finished listening to over an hour of a Karajan recording from the Fifties that was rather thin and bright. After an hour with the Nielsen disc, its sound seemed just right to me, very realistic (if still a touch clouded). The Pan and Syrinx music appeared especially felicitous, with an excellent sense of orchestral depth. For the few bucks one might expend on the disc, one can afford to experiment with the sound and music.

Email ThisBlogThis!Share to TwitterShare to FacebookShare to Pinterest
Labels: Nielsen