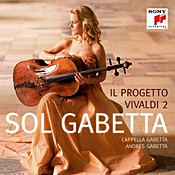 After the success of her first album of Vivaldi cello concertos in 2007, Argentinian-born cellist Sol Gabetta here provides a follow-up collection of cello works by Vivaldi and others, which she calls Il Progetto Vivaldi 2 ("The Vivaldi Project 2"). Considering that Vivaldi wrote some thirty cello concertos and a multitude of cello sonatas, if Ms. Gabetta plans to make the project complete she may be a hundred years old by the time she's finished. In any case, she's a fine cellist, and for anyone interested in Baroque music, her present album of Baroque music by Italian composers makes pleasurable listening.

By way of introduction, Ms. Gabetta, born in 1981, studied piano and cello in Buenos Aires, won her first cello competition at the age of twelve, moved to Spain, then France, and currently lives and teaches in Switzerland. She has won numerous awards over the years, founded a chamber-music festival, recorded eight albums, formed her own ensemble--Cappella Gabetta--and worked with many of the world's leading orchestras and conductors. Not bad for a woman as young as she is.

The program begins with three cello concertos by Antonio Vivaldi (1678-1741), RV 423, 416, and 420, in each of which she is supported by the Cappella Gabetta, a thirteen-member group headed by Ms. Gabetta's brother on first violin. Ms. Gabetta plays a 1759 G. B. Guadagnini cello, by the way, and adheres as closely as possible to period-instrument practices, so be prepared for some interesting Vivaldi. To say she performs with vigor and enthusiasm would be an understatement, dexterous in her approach yet powerful when necessary. While the outer movements show plenty of life and move along at an uncommonly brisk pace, they are lyrical as well. The slow movements are often just as virtuosic for their sweet emotional appeal.

Next comes Vivaldi's Cello Sonata in G minor, RV 42, a surprisingly moving piece of music, a booklet note suggesting relationships between it and Bach's second cello suite. One can certainly see similarities, although if anything, under Ms. Gabetta's guidance the Vivaldi piece has a more plaintive, mournful feeling to it, at least until the closing movement.

Next up is the Cello Concerto in D major by Leonardo Leo (1694-1744). Leo was the headmaster and director of music at a school in Naples, and he produced over 500 composition, most of them today pretty obscure. The D Major Concerto is in five movements, with a beautiful, songlike Larghetto at its center, and Ms. Gabetta is not shy about exploiting its belle canto elements.

The final work Ms. Gabetta and her ensemble play is the Cello Concerto in D minor by Giovanni Benedetto Platti (1697?-1763). If you've never heard of Platti, join the club. Ms. Gabetta gives the work a première recording. Even though it may not seem like anything special, it is quite appealing, and under Ms. Gabetta's direction its slow movement has a particularly lilting, haunting quality. It's worth a listen.

Sony recorded Ms. Gabetta and her group to good effect at Salle de musique, La Chaux-de-Fonds, Switzerland in January of 2011. The cello itself is pleasingly warm, rich, and resonant, with a realistic string tone and a strong, immediate impact. The ensemble around her sometimes appears a tad bunched up, without a lot of space around the instruments, but they sound clear and smooth, which is the main thing, and stereo depth and breadth are more than adequate.