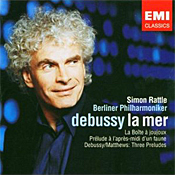 You'd think by the number of recordings Sir Simon Rattle makes for EMI that he was the only artist they had under contract. I exaggerate, but if you had to have only one conductor right now, you could do worse than Rattle. In the present disc, the maestro and his imposing Berlin Philharmonic give us an album of Debussy music--a couple of warhorses and a couple of less well-known items.

The warhorses are La Mer and Prelude a l'apres-midi d'un faune. Practically every conductor on the planet has recorded them at one time or another, so there's plenty of competition. In both works, Rattle opts for a light, radiant, dreamy, ethereal, almost surreal impressionist effect, with the EMI audio engineers contributing with a relatively soft, slightly distant, although extremely dynamic live sound. This delicate, airy approach is at the expense of as much excitement as some of Rattle's rivals conjure up in the music, yet it works reasonably well in the Prelude, though leaving La Mer somewhat wanting for passion. A quick comparison of Rattle's La Mer to those of Jean Martinon (EMI), Leopold Stokowski (Decca), Andre Previn (EMI), Bernard Haitink (Philips), Herbert von Karajan (DG), Fritz Reiner (RCA), and Geoffrey Simon (Cala) reveals greater degrees of color and animation from those gentlemen, plus more vibrant recordings. Not that there is anything wrong with Rattle's performances or the recording, incidentally; they are quite beautiful in their way, just not as lively or as vivid as some others.

The highlight of the Rattle disc, however, is La Boite a joujoux, a series of tone poems based on children's stories that Debussy left unfinished at his death in 1918 and completed by a friend, Andre Caplet. They are delightful, Rattle's interpretations of them are charming, and the recording at this point seems a tad more forward and animated. The disc concludes with three of Debussy's piano Preludes orchestrated by Colin Matthews, which are also quite appealing.

So, it's hard to fault Rattle on any specific count. He interprets the works as voluptuously as any Debussy fan could want, and he builds suitably atmospheric, emotional moods in each piece. It's just that it's equally hard to pick absolute winners in music so well covered by current recordings.

One final note: Because of the wide dynamic range on the disc, listeners may find themselves tempted to increase the gain, like during the opening moments of Prelude a l'apree-midi d'un faune, a decision the listener may soon regret, as the volume will quickly overpower the music. Although a wide dynamic range is perhaps an unfortunate by-product of getting too much high fidelity in today's compact discs, it's a concern with which one can easily live.