Dvorak: Symphony No. 9 "From the New World" (CD review) 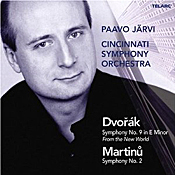 The idea behind this coupling was for Maestro Paavo Jarvi to bring together works by two celebrated Czech composers, Antonin Dvorak (1841-1904) from the nineteenth century and Bohuslav Martinu (1890-1959) from the twentieth. Jarvi intended for us to see how the two pieces, while separated by time, found connections of national heritage. Fair enough. The only minor reservation I would have is that except for the representative works coming from Czech composers who wrote them in America, they are really not all that much alike except in their overall positive, melodic character.

Of greater concern, I can't say I found Jarvi's interpretation of the "New World" particularly compelling. Maybe I've listened to too many recordings of the piece over the years for a middle-of-the-pack contender like Jarvi's to affect me much. His reading is certainly not bad by any means, and for the listener who doesn't have the work (is there such a listener?), Telarc recorded this one pretty well, so it's probably as good as most. It has a high energy quotient, an imaginative attack, and an appropriate zest. Moreover, Jaarvi's Cincinnati Symphony plays as lustrously, as glowingly, and as precisely as any ensemble you could find.

Nevertheless, it's really the companion piece, Martinu's Second Symphony, that stands out here. Martinu rejected what he deemed the discordant components of modern music and preferred a more relaxed, old-fashioned style, though one often marked by modern jazz influences as well as idiomatic folk elements. The composer wrote that his "Second Symphony is calm and lyric. It seems to me that we have no need of a professional and technical expression of torture; rather do we need orderly thought, expressed calmly." Thus do we get a brief, twenty-three-minute symphony in the conventional four movements that includes any number of dance rhythms and jazz inflections. Jarvi seems to be having fun with the music, and he easily communicates in it the calm and order as well as the sheer exhilaration the work requires.

Telarc's sound is, as is sometimes the case, a tad on the warm, thick side, with a wonderfully dynamic bass line and reasonably good stereo imaging. The highs ring out clearly and realistically in the "New World," especially. While I'm not sure the disc is worth full price for essentially the Martinu alone, I am glad I got to hear both pieces on the disc side by side.