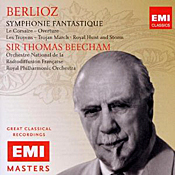 It's always pleasant when something good gets better. So it pleases me when a company like EMI re-releases a disc as superior as Sir Thomas Beecham's 1959 recording of Berlioz's Symphonie fantastique at a lower price than ever.

The fact is, I am sometimes hesitant to recommend anything as the absolute best of its kind, largely because few things are, indeed, the absolute best of anything; yet Beecham's interpretation of Berlioz is without a doubt the best I've ever heard. It is in every sense the absolute finest reading the Symphonie fantastique has ever had and is one of my Desert Island Favorite recordings.

Hector Berlioz (1803-1869) wrote the Symphonie fantastique in 1830, and it quickly became one of the most influential pieces of music of all time. Combining the programmatic elements of predecessors like Vivaldi in his Four Seasons and Beethoven in his Pastoral Symphony and utilizing an enormous orchestral arrangement for well over a hundred players (Berlioz employed about 130 musicians for the première), the result was extraordinary for its period. I suspect if the composer had had a wind machine, electronic instruments, and a light show available to him, he would have used them, too. Yet the music remains extraordinary for our own times as well, even though people have repeated and imitated it at length.

In the work's five movements, the young Berlioz (at the time in his mid twenties) wrote autobiographically of the hopeless love of a young man for a woman, the young man falling into a drug-induced dream, which the composer describes in his music. The woman reappears throughout the Symphonie in the form of an idée fixe, a "fixed idea" the young man cannot shake.

The title of the first movement, "Reveries - Passions," is self-explanatory, and Beecham treats the music as wispy snippets of passion. "The Ball" comes next, a waltz that Beecham makes both lilting and swaggering, too. In the "Scene in the Fields" the young dreamer hears a pastoral song, heightening his feeling for the woman, only to let his paranoia about her possible infidelity consume him and lower his spirits. Even in this usually tepid segment, Beecham provides a loving and uplifting quality in a leisurely yet dynamic presentation.

It's the fourth and fifth movements, however, that warm the hearts of audiophiles everywhere. They are tours de force of imagination and orchestral exuberance. The hero envisions in the fourth movement that the court has convicted him of murdering his loved one, and his jailors are leading him to the scaffold for hanging. It is grim satire to be sure, and it is best if the music is performed a little ominously, but not jauntily, for Berlioz's effect to work. Here, Beecham is at his most colorful and his most mischievous, making the music sinister and menacing while still being fun. This "March" is no jaunty walk but a genuinely grim, if sardonic, trudge to the execution block.

In the finale, the "Witches' Sabbath," the fates seem to have committed the young lover to some kind of purgatory or hell for his crime of passion, where he sees his beloved among the witches. This is where most conductors, including Beecham, pull out all the stops. Beecham's witches are actually quite scary in these concluding revels.

Other conductors (Colin Davis, especially) may capture the spirit of these large-scale orchestral poems pretty well, too, but no other conductor captures the essence quite so thrillingly, so longingly, so individualistically, so magically as Beecham. The conductor provides each of the five movements its special flavor that flawlessly expresses its themes and content.

The French National Radio Broadcasting Orchestra sparkles in the Symphonie, with excellent imaging properties and only the strings a tad thin and bright. Beecham's own Royal Philharmonic, however, in recordings made a year or two earlier actually sounds somewhat warmer, richer, and fuller in the accompanying Berlioz works, "Le Corsaire," the "Trojan March," and the "Royal Hunt and Storm."  The choral parts in the "Royal Hunt" are a bit forward, but otherwise they sound splendid. They make top-notch companions to the Symphonie and are the equals if not betters of any rival performances. EMI remastered these 1957-1959 recordings in 2003, taming some of the earlier CD's hard high end. Reissued in 2011 at a budget price, the album is irresistible.