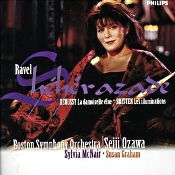 The three song cycles assembled on this 1999 Philips release are voluptuous and sensitive, even if the musical setting for Britten's collection of short poems is in a somewhat less ethereal world than the other two.

The highlight, as one might expect from its greater popularity, is the opening composition, Maurice Ravel's Sheherazade. Inspired by the impressionism of Debussy, Ravel's Sheherazade inhabits a far different landscape than Rimsky-Korsakov's earlier, more literal series of tone poems. The Ravel is all shapes and shadows and sinuous lines.

Debussy's early piece La damoiselle ellue is likewise more figuratively evocative than literal. It is based on the verses of British poet and illustrator Dante Gabriel Rossetti describing his painting of "The Blessed Damozel," and adds to the mix a chorus with soprano narration. In some ways it is more lyrical than the Ravel and equally atmospheric.

English composer, conductor, and pianist Benjamin Britten's Les illuminations is the newer of the three works, the composer having completed it in 1939, based on poems by French poet Arthur Rimbaud. It is the most eclectic of the written compositions represented here, and, appropriately, the musical accompaniment is the most varied, from serene and seductive to almost raucous by turns. To suggest that all of this music is quite sensuous and sexual in nature would be an understatement.

American opera and Broadway soprano Sylvia McNair sings the title roles expressively yet without fuss. They are reasonably straightforward renderings that allow the songs to breath in their own right. Some listeners may prefer more dramatic, perhaps even more sensitive, readings, but no other interpretation, I'm sure, captures the simple beauty of the poetry any better than these. Maestro Seiji Ozawa's accompaniment, likewise, is unobtrusive, serving only to reinforce the mood and never drawing attention to itself, while the Boston Symphony play with a velvety smoothness.

The Philips sound is slightly dark, with Ms. McNair clearly at stage front. There is good orchestral depth, a sometimes soft high end, and little need for extended dynamic impact or a sweeping frequency range. The recording does not sparkle, but it doesn't need to. The singing and phrasing sparkle enough.