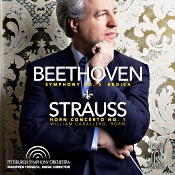 Dynamic. That's the best word to describe Manfred Honeck's performance of the Beethoven Third. It's dynamic in terms of Honeck's interpretation and in terms of Soundmirror/Reference Recordings' sonics. Of course, if "dynamic" is not the first thing you want from a Beethoven symphony, you might not appreciate Honeck's way with it. But there is no questioning the excitement the recording generates.

Anyway, you'll recall that in 1804 Beethoven originally wrote his Symphony No. 3 "Eroica" to honor Napoleon Bonaparte, whom the composer greatly admired. However, just before Beethoven premiered the piece in 1805, he learned that Bonaparte had declared himself "Emperor," corrupting the ideals of the French Revolution, so he removed the man's name from the manuscript, inscribing it, instead, "to celebrate the memory of a great man." More important, the symphony marked a turning point in Beethoven's artistic output with its daring length, range, and emotional commitment, marking something of a new beginning in the development of symphonic structure and prompting endless discussions among critics about what it all meant.

The first movement Allegro con brio contains the usual complement of rhythms and harmonies we expect of Beethoven. The opening chords set the tone. Under Honeck, they are decisive, forceful, impactful. However, this is not to suggest that Maestro Honeck takes anything too fast. The speeds may sometimes be brisk, sometimes less so, but they are pretty well judged, the rhythms firm but not erratic. So it's a movement of considerable shifts in emphasis--from heroic to downhearted--just as the composer no doubt intended.

Nevertheless, it is in the second-movement funeral march that conductors must prove their worth. Too slow and it becomes a monumental drag; too fast and it no longer sounds like a funeral march. Here, Honeck adopts a pace about midway between the extremes. He doesn't follow Beethoven's original crazy-fast tempo markings (as most period-instrument and historically informed performances do) nor does he allow it to drag on endlessly. Instead, it sounds appropriately solemn and elegiac, opening up beautifully in the second half with dauntless propulsion before returning to earth.

The third-movement Scherzo is quite lively, even by Beethoven's standards. Honeck attacks it with vigor, in truth outpacing Roger Norrington in his period performance. However, I found it a little too relentless and without much requisite charm.

As a conclusion, Beethoven's Finale is both regal and triumphant, a folklike summing up of the whole piece. Honeck begins with a tremendous flourish of passion before settling into Beethoven's joyous cadences. Again, though, Honeck's relentlessly forward momentum almost does him in, the music seeming in parts almost chaotic rather than flowing.

So, what we get from Maestro Honeck is a performance that stresses what the conductor calls "the novelties" of the symphony. It is certainly not a traditional approach, and it is one that a listener might find taking a little getting used to. Yet it is not so out of the mainstream that one could call it eccentric. Given the quality of the Pittsburgh Symphony's playing as an added bonus, I have a feeling most listeners will enjoy it.

As a coupling, Honeck offers Richard Strauss's Horn Concerto No. 1, Op. 11, with William Caballero, horn. Strauss was only eighteen when he wrote it in 1882-83 while a philosophy student at Munich University. It has since become one of the most-popular horn concertos in the classical repertoire, an interesting feat considering the range (and difficulty) of the piece. I suspect the conductor chose it to accompany the Beethoven because it is more directly related to the earlier composer than to Strauss's own later work. Honeck, Caballero, and the Pittsburgh players give it a good workout.

Producer Dirk Sobotka and engineers Mark Donahue (Beethoven) and John Newton (Strauss) of Soundmirror, Boston recorded the music live at Heinz Hall for the Performing Arts, Pittsburgh, PA in October 2017 (Beethoven) and September 2012 (Strauss). They present the recordings on disc in hybrid SACD, meaning you can play it in 5.0 multichannel sound or 2.0 stereo from an SACD player or 2.0 stereo from a regular CD player. I listened in 2-channel stereo from the SACD layer.

Despite its being a live recording, the sound in the Beethoven is not as close-up as it is in most such enterprises, thus ensuring a fairly natural perspective. The Strauss, recorded some five years earlier appears slightly closer but is still good. There is a nice ambient glow around the instruments in the Beethoven, too, and a realistic sense of the concert hall. There is a mild background noise, but it is hardly troubling, and, of course, the dynamic range and impact are excellent. The overall sonic effect is warm, smooth, and comfortable. The producers have thankfully removed all traces of applause.