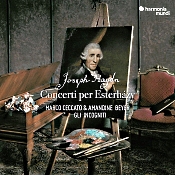 There was a time when it seemed that a period-instrument band was performing on every other disc crossing my desk. Maybe it was a passing fad because in past few years I've seen relatively few such recorded performances. So it's refreshing to note they haven't gone away entirely, as evidenced by this Harmonia Mundi release by violinist Amandine Beyer, cellist Marco Ceccato, and the historically informed, period-instrument ensemble Gli Incogniti performing some early works from Joseph Haydn.

Gli Incogniti is a small musical group formed in 2007 to play historically informed performances of mostly Baroque material on period instruments. Their number usually includes about seven performers, although here they are augmented by other performers to double their numbers. (The size of orchestras would increase dramatically over Haydn's lifetime, but the size for which he wrote the concertos on this disc was more in the range of fifteen-to-twenty players.) Ms. Beyer and Mr. Ceccato are members of the original ensemble. The album under review marks their by my count their eighth album.

All three of the concertos on the program date probably from somewhere between 1765-1771, the early classical period. The exact dates are unknown and the approximate dates are educated guesses. Anyway, Haydn (1732-1809) was employed at the time as Kapellmeister by Princes Paul Anton and then Nickolaus, heads of the wealthy Esterházy family. As such, Haydn was in charge of the Esterhazy's orchestra, and he was anxious to impress the princes with his compositional and playing skills. Except for a few miscellaneous concertos for lyre and such that he wrote some twenty years later, it was mainly during the 1760s and early 1770s that Haydn composed concertos for various virtuoso instrumentalists. As his career proceeded, Haydn would increasingly spend his time on the symphony, understandable as he would eventually write 104 of them.

As for the quality of the three concertos, well, there is probably a reason why they have never entered the basic repertoire. This is not to suggest they are boring or trite. Indeed, all three are imaginative and filled with Haydn's usual felicitous touches. It's just that there is little in them that stands out or sets them apart. They are simply good natured, charming, and entertaining. Of course, we also have to remember that they contributed to the early blossoming of the concerto genre, a category that in another quarter century or so would take its place alongside the symphony as a dominant genre of the classical world.

As for the quality of the playing, there is no doubt. Both soloists--Ms. Beyer on violin and Mr. Ceccato on cello--perform splendidly. It is clear that their affinity to this music and their love of it are driving forces in the success of the performances. What's more, it is clear that Gli Incogniti enjoy what they're doing and have done it often enough that it comes through with a precision that does not preclude a joyous spontaneity.

Producer, engineer, and editor Alban Moraud recorded the concertos at the Theatre Auditorium, Poitiers, France in January 2018. Even though the miking distance seems moderate, there is a healthy bloom from the auditorium, helping the sound to appear more lifelike. Yet it does nothing to detract from the detail of the sonics. The solo instruments shine, and the accompaniment is well defined. The stage width is relatively narrow, and the depth is quite good. This is a small group, after all, and their very size ensures a welcome transparency. The balance is about as neutral as one could want, and the whole affair is smooth and comfortable. It's a fine production.