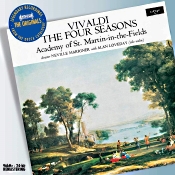 There was a time year ago that I had almost given up hope the major classical record labels were going to remaster and reissue any more of their back catalogue in audiophile or near-audiophile editions. Production of EMI's "Great Recordings of the Century," DG's "Originals," and Decca's "Classic Sound" had begun to slow down precipitously by 2006. But then Decca came back with a series of reissues in 96kHz/24-bit remasterings they called "The Originals," presumably taking the nod from their former rival, DG, and now stablemate at Universal Music.

Among the first releases in Decca's "Originals" series was the late Neville Marriner's 1969 Argo recording (issued in 1970) of Antonio Vivaldi's The Four Seasons with violinist Alan Loveday and the Academy of St. Martin in the Fields. And I'm so glad that Decca not only remastered the recording in their most modern technology but included a front picture of the original Argo cover as well. Not only is it appropriate, it reminds me that I wasn't imagining things in remembering that in their beginning the Academy used hyphens in their name. I often still do, regardless of how they punctuate it now. Anyway, another retro thing the new Decca reissues do is embellish the top of each "Originals" disc with a replica of the old LP. In other words, the CD looks like a miniature vinyl record.

It seems as though I have so many Four Seasons in my collection and so many that pass through the house for review that the only time I get a chance to listen to Marriner's performance is when a new edition of it comes along. Then it reminds me just how good it is. The last time was in the late Nineties when it appeared as a "Penguin Classic."

Years ago I included the Marriner recording in a survey of The Four Seasons, and I used the word "surrealistic" to describe it, a term suggesting the interpretation's imaginative touches. I'm not sure it's actually a compliment, but it seems appropriate. Marriner's views of the individual tone poems are highly evocative, as they should be, and are characterized by considerable polish, subtle embellishments, and sometimes dramatic shifts in tempo and dynamics. The fast movements are lively, often sparkling, and the central, slow movements are graceful and refined. However, it is those dynamic contrasts that stand out. The disc has had me jumping for the volume control on more than one occasion over the years. I couldn't say whether Marriner had a really precise control over his Academy musicians (likely), or whether the balance engineer did some tweaking of the dynamics after the fact (also possible), but the results are both startling and pleasant.

Yes, the sound is agreeable, although perhaps not the epitome of transparency. Still, it is warm and smooth. The new mastering seems to add a touch more clarity in the midrange, a bit more body in the upper bass, and, more important, eliminates the slightly sour overtones I remember hearing in its first CD rendering in the early Eighties.

Now, to make a good thing even better, Decca coupled The Four Seasons with three wind concertos that Marriner and the Academy recorded in the mid Seventies. If anything, they sound even better recorded than the Four Seasons, and they almost double the playing time of the disc over all previous editions of Marriner's Four Seasons alone. These added items are the Concerto for Two Oboes in D minor, with Neil Black and Celia Nicklin, oboes; the Bassoon Concerto in A minor, with Martin Gatt, bassoon; and the Piccolo Concerto in C major, with William Bennett, piccolo. Needless to day, they, too, are performed in impeccable style and grace by all parties.

While my tastes have changed somewhat over time, and I now tend to favor the period-instrument recordings by the Philharmonia Baroque Orchestra, the Drottningholm Baroque Ensemble (BIS), the English Concert (Archiv), La Petite Bande (Sony), and Tafelmusik (Sony), Marriner's modern-instrument version easily takes its place beside them.