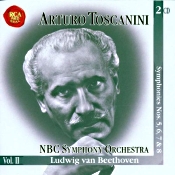 It seemed like only a few years before this late-Nineties release that RCA had issued many of Toscanini's old NBC Symphony Orchestra recordings on CD in what they said were the definitive editions. I thought the sound was an improvement on the noisy, hard, high-pitched, sometimes pseudo-stereo qualities of the vinyl, but for me it was still not pleasant enough for easy listening. Then with these releases, RCA again remastered Toscanini's Beethoven symphonies, among others, on three two-disc sets, and using 20-bit technology the sound appeared further improved. In fact, except for its being in monaural, the sound is darned near close to modern standards. I suspect the new sound is either more faithful to the original source than the first CDs were, or the folks at RCA doctored it to sound better. In either case, the results are welcome. Still, it does make one wonder, doesn't it, I mean without recourse to hearing the master tapes, just how accurate the sonics are that we're getting on a CD.

Anyway, for listeners unfamiliar with Toscanini's later style (these recordings derive from the early Fifties), the great maestro seemed to become toward the end a little less expansive in his overall approach and a bit more rigid in his tempos. He was no less eloquent, but there emerged a marked consistency of beat throughout his conducting. Here it works best, I think, in the Fifth Symphony, which makes "Fate" sound more ominous than ever and the Finale more imposing.

In the lighter Sixth, Seventh, and Eighth Symphonies, it is the conductor's precision of attack and his clarification of textures that come to the fore, with the brisk, steady rhythms perhaps a minor liability. Toscanini fans will hate my having said that, but I had on hand for comparison his Sixth Symphony with the BBC Symphony Orchestra recorded well over a dozen years before, and I must say I have a marginal preference for that earlier, more relaxed interpretation.

Nevertheless, these are all performances to be reckoned with, and each symphony shows a mastery of technique that makes it stand out as authoritative. Except in the aforementioned comparison, the newer Sixth sounds just right, even as the other three symphonies sound correct in almost every way. The conductor's minutely accurate control of every aspect of his music-making tends to mitigate any arguments against his methods. Interestingly, I began liking the Seventh the more I listened to it, in spite of a note of coldness in Toscanini's manner; yet I liked the Eighth the less as it went along, probably hoping it would eventually lighten up.

There is no question in my mind about the sonics. This is the best recorded sound we've probably ever heard from Toscanini, for which RCA used UV22 Super CD encoding. No longer do I discern much of the pinched nasality, the closed-in acoustics, or the bright, hard, steely mids and treble of the past. Nor is there any hiss to speak of. Naturally, RCA undoubtedly used some noise reduction, so highs do not exactly sparkle. That is one of its only drawbacks, along with a small degree of bass and dynamic limitation. It is remarkably smooth, room-filling sound.

I have not heard RCA's other two Toscanini Beethoven sets with the NBC Symphony Orchestra, but if are as good as this one, I would have no hesitation in recommending the whole cycle.