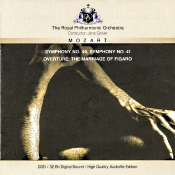 About twenty years ago, seeing the need for good, reasonably priced classical recordings--an area the Naxos label had already cultivated--the Royal Philharmonic Orchestra embarked on a project to provide the public with just such low-cost material. With an initial catalogue of over fifty basic repertoire items on the Intersound/Tring label, the RPO enterprise did very well for itself. Today, one can still find most of the material on other labels, like Planet Media and the RPO's own Masterworks.

Certainly, there was no question about the RPO organization's credentials, the orchestra founded in 1932 by conductor Sir Thomas Beecham. At the time of the project's inception, 1998, it's patron was Her Majesty Queen Elizabeth; the President was Lord Menuhin; the Music Director was Vladimir Ashkenazy; the Principal Conductor was Yuri Temirkanov; the Associate Conductors were Sir Charles Mackerras, Vernon Handley, and Gennadi Rozdestvensky; and the Composer in Residence was Sir Peter Maxwell Davies. Whew! That's quite an assemblage. The RPO's various recordings selected for initial release were conducted by the aforementioned people, plus by Paavo Jarvi, Mark Ermler, Barry Wordsworth, James Lockhart, Raymond Leppard, Yuri Simonov, Jean-Claude Casadesus, Jane Glover, and others. So you knew going in that this whole venture was of the highest order.

I sampled half a dozen of the RPO organization's first releases in the then-new series, recorded between 1993-1996, with five different conductors. Of the six recordings, the one I was most fond of and can recommend without hesitation is Jane Glover's disc of Mozart's last two symphonies, Nos. 40 and 41, and the Overture to The Marriage of Figaro. Leading an RPO trimmed down from its normal complement of ninety-odd players to an ensemble of about half that size, Ms. Glover provides fleet, unmannered interpretations of all three Mozart works. Her tempos are brisk but never breathless; she indulges in very little rubato; and she keeps her dynamic contrasts at a minimum. She sticks closely to the printed page, offering performances more in accord with the practices of period instruments groups than of large, twentieth-century orchestras.

You will find here none of the grand Romanticism or personal idiosyncrasies of a Karajan, Klemperer, Jochum, Bernstein, or Bohm. The readings are more on the order of Daniel Barenboim's old recordings with the English Chamber Orchestra for EMI in the late Sixties. The emotion is derived from the clean, unforced energy Ms. Glover delivers throughout.

The sound, recorded at All Saints Church, Petersham, Surrey in 1993, is likewise clear and straightforward, with good definition and respectable stereo imaging. There is not a lot of weight in the bass, but that may be a boon for audiophiles who often don't want much bass overhang to interfere with the transparency of the midrange, anyway. Besides, this music does not cry out for mass so much as it does for lithe power, which is what the sonics deliver.

The other discs I auditioned in the series included Rimsky-Korsakov's Scheherazade, with Barry  Wordsworth, which I thought a notably tidy recording. Bizet's Carmen Suites, with Mark Ermler, was energetic and flavorful, and comes coupled with Grieg's Peer Gynt Suites. Berlioz's Symphonie fantastique, with Sir Charles Mackerras, seemed rather pedestrian by Mackerras's standards; its sound is lifelike if a little thin. Tchaikovsky's Romeo and Juliet and 1812 Overtures, with Yuri Simonov, built up a good head of steam in several of the pieces but offered little that I hadn't heard before. And Beethoven's Symphony No. 6, with Mark Ermler, I found a little too slack for my taste, especially when combined with its somewhat thick, muffled sonics.

Overall, though, this was fine line of CDs, one that can provide the occasional gems it would be a shame for one to miss.