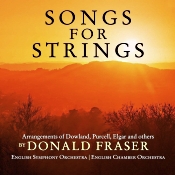 These days in particular, it's important for any new classical release to offer something unique, something that hasn't been done (much) before. Hardly any record company wants to do another Beethoven symphony; the catalogue is too filled already with great recordings of the basic repertoire. Thus, a new release has to feature a hot, new star; or it has to feature some unusual instrument or instruments; or it has to feature new arrangements of other things, as we have here.

Donald Fraser is an English composer, arranger, conductor, and record producer whose album Songs for Strings features fifteen selections, some old, some new, some well known, others not so well known, rearranged for string orchestra, either the English Symphony or the English Chamber Orchestra. Fraser conducts both ensembles and produces some decidedly winning and entertaining results.

All of the tracks are attractive: lush yet transparent and beautifully presented. If there's any drawback, it's that the pieces are rather brief, three or four minutes each at best. The program doesn't attempt to present a unified whole, so it's more like a pop album with a lot of varied material. Not that that's bad; just different for a classical album. Call it a crossover album if you will. Whatever, it makes for sweet, easy listening.

Favorites? Of course. "The Queen's Hall" sets the tone for the program: rich, plush, flowing, and thoroughly delightful. Everything else follows suit. Purcell's "Ground in C minor" has a Pachelbel quality to it, which Fraser alludes to in a booklet note. Lotti's choral hymn "Cruxifixus" translates well to strings.

Vivaldi's Largo from the Concerto for 2 Cellos sounds lovely, but we have come to hear so much of Vivaldi's music expanded for larger string forces that it doesn't carry quite the distinctiveness of many of the album's other pieces.

"Lord Lovat's Lament" is an arrangement of a Scottish tune originally written by an ancestor of the present David Fraser. It has an attractive folk-song lilt to it and sounds quite charming in its present incarnation. I kind of missed a bagpipe, though. That arrangement sounds positively ancient compared to the work that follows it, a very modern-sounding, impressionistic "Grey Clouds" by Franz Liszt. While it's probably the second most-unusual track on the program, it's also among the most interesting.

Alexander Scriabin wrote his "Canon" when he was twelve years old. Remarkable, and Fraser's transcription for strings holds up well, perhaps giving it new life. Again, as a contrast, we get Ravel's little "Valse" (in the style of Borodin), an engaging moment that flies by only too fast. Then there are four vocal works--three by Elgar and one by Fraser himself--that sound pastoral and entrancing in their new string attire.

Fraser ends the program with the only non-orchestral track, Marin Marais's "Sonnerie" ("The Bells of St. Genevieve"), a remix for violin and electronics and inspired by the imitation of bells. It was a hit for Fraser back in the late 90's, and it's without question the most singular work he offers, sounding a bit more like Wendy Carlos or Tomita than the other works on the program. Still, it's an attractive piece and holds its own fascinating if disparate pleasures.

Producer Donald Fraser and engineer Simon Kiln recorded the music at Studio No. 1, Abbey Road, London in  July 2013 (ECO) and Studio No. 2, Abbey Road in April 2018 (ESO). They recorded the final track on the album at The Barn Studio, Shirland, Illinois in May 2018. Like so many recordings before it made at the Abbey Road studios, this one sounds lifelike and detailed, never dull or veiled. The solid bass line stands out without overpowering the midrange; the highs glisten; and the mids are about as transparent as one could want. It's a bit close, yet a mild studio bloom enhances the overall effect of realism. Although from Avie, it actually sounds like a vintage EMI-London Symphony analogue recording from the 1970's, for me, anyway, a golden age of fine recording. So, yeah, I liked it a lot.