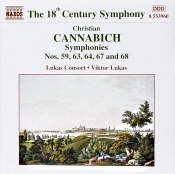 The folks at Naxos seem determined to provide us with every symphony ever composed in the 1700s in their "18th Century Symphony" series, and at a modest price who could not resist wanting them all.
Like other releases I've heard in the line, this one released in 1998 is technically and artistically first-rate. German violinist, composer, and Kapellmeister Christian Cannabich (1731-1798) was yet another contemporary of Mozart who was popular in his day but whose light quickly faded into history. Mozart was apparently fond of Cannabich's composing, and especially of his conducting; he was among the few musicians Mozart praised. Perhaps it's no wonder; Cannabich's music sounds more like Mozart's than some of Mozart's own early works.

Whatever, the present disc contains five short symphonies, each in three movements and about a quarter hour long. Why Naxos present them in the order they are in is anybody's guess, but they appear on the disc as Nos. 63, 67, 64, 59, and 68. Why not chronological? Who would really care one way or the other?

One is tempted to mix and match the movements to program a new symphony of one's own--a favorite opening Allegro here, a slow Andante there, maybe a zesty Presto from somewhere else. Key changes in the pieces are pretty abrupt, anyway, and there is little or no apparent thematic continuity between movements as they are. (At least not apparent to me.) Nevertheless, the symphonies are all rather enjoyable, played with a lightness of heart by Viktor Lukas and his small Lukas Consort, a group of about fifteen strings and an assortment of solo wind players.

The accompanying booklet note tells us that Cannabich himself led a rather large ensemble as the Director of the Mannheim Orchestra of his day (1774-1798), an orchestra sometimes reaching as many as ninety-five musicians and finally, because of budget restraints, reduced to about fifty-five players. Certainly, the more diminutive size of the Lukas Consort gives them the advantage of clarity, which is enhanced by the general excellence of the Naxos recording.

Email ThisBlogThis!Share to TwitterShare to FacebookShare to Pinterest
Labels: Cannabich