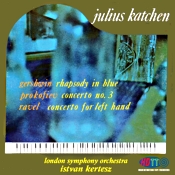 Julius Katchen (1926-1969) was an American concert pianist who died of cancer just a few months after recording the present album in 1968. One would never guess from the recording how ill he was; most of the music reveals the vigor and vitality of a man in more than good health. Yet, things happen. The celebrated Jewish-Hungarian conductor in the work, Istvan Kertesz (1929-1973), would himself succumb to a drowning accident a few years later. So, in a way, this is a sort of memorial to both artists and a fitting tribute to both their talents.

First up on the program is Rhapsody in Blue, which as you no doubt know bandleader Paul Whiteman persuaded American composer and pianist George Gershwin (1898-1937) to write back in 1924, suggesting he make a jazz-inflected showpiece for Whiteman and his orchestra. When Gershwin initially declined, saying he didn't know enough about orchestration to do the work justice, Whiteman assured him that he could get Ferde Grofe to arrange it for piano and orchestra. As everyone knows, Gershwin's fusion of classical and jazz became a musical phenomenon.

Katchen's version of the piece with the London Symphony may not be quite the lean, mean classical jazz Gershwin intended, though. Under Katchen and Kertesz, it's more a slightly jazzy classical piece. I wouldn't go so far as to say it's too sedate, too refined, too symphonic, and too somber, but it's close. I think it's just that Katchen was foremost a classical pianist and his naturally elegant style wasn't quite what Gershwin needed. Still, it's a pleasure listening to him play.

Next, we find the Piano Concerto for the Left Hand in D major (1930) by French impressionist composer Maurice Ravel (1875-1937), which Ravel wrote for a pianist who had lost his right arm during the First World War. This one is more up to the style of Katchen and Kertesz. We have it here in one continuous movement, although Ravel once said it was really two connected movements. Whatever, Katchen and Kertesz navigate the somewhat less but still jazz-toned score with more comfort, more-inherent ease, than they managed in the Gershwin. Both men lend a good deal of weight and gravitas to the music without missing any of its rhythmic tonal colors or lush, lyrical qualities.

Finally, we get the Concerto No. 3 in C major (1921) by Russian composer Sergei Prokofiev (1891-1953). While its arrangement is in a traditional three movements, the second movement is a set of variations ranging from fairly slow to very fast, and the final movement is a brilliant display of virtuosity. Here, too, Katchen and Kertesz shine, with a particularly playful opening Allegro and a dazzling close.

Producer Ray Minshull and engineers Kenneth Wilkinson and Alec Rosner recorded the music for Decca at Kingsway Hall, London, in November 1968. HDTT remastered the album in 2016. The sonics are nicely warm and rounded, with a decent sense of depth and dimensionally. The engineers captured the ambience of Kingsway Hall quite realistically, too, although in terms of balance the piano seems a bit bigger, more forward, than it might appear in an actual concert. Upper mids are sometimes a tad rough as well, although it's not enough to warrant concern. It's a comfortable, enjoyable sound, sure to please most listeners.