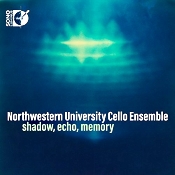 Here, I make a confession: Until auditioning this album, I had never before heard a cello ensemble. Indeed, I no idea what to expect from a large cello ensemble, what their tone or sound or level of expertise would be. Nor were any of my expectations very high, and the disc lay on my living-room shelf awaiting a listen for some weeks as I kept putting off what I thought might be a chore. Then I did listen.

So, what is this cello ensemble all about? According to the disc's accompanying booklet, the Northwestern University Cello Ensemble was "established by artistic director and Northwestern University cello professor, Hans Jorgen Jensen." The ensemble "began as a result of bringing together Northwestern students, talented Chicago-area high school cellists, and 21 highly successful Northwestern alumni in May 2013 to record Mahler's Adagietto. This unique and memorable event inspired the continuation of the project and the decision to record this debut album."

Don't think this is a small group, either. Augmenting the twenty-one alumni referred to above are dozens more, the booklet naming about fifty-eight cellos, seven basses, a guitarist, a percussionist, and a harpist, depending on the piece of music. They make a glorious sound.

The program consists of eight selections, the first one in three movements. The agenda is as follows:

As you can see by the birth and death dates above, the program alternates modern numbers with older, Romantic transcriptions. Yet the modern material is hardly raucous, nonharmonic, or atonal. Appropriate to the mellifluous sound of the cello, Maestro Jensen has chosen music that complements the instruments, and most of it is quite beautiful, gracefully rhythmic, flowing, and satisfying.

Among the album's few tunes that sound at all "modern" is Michael van der Sloot's Shadow, Echo, Memory, which tends to be a bit more ambitiously experimental than the other items on the program. However, Van der Sloot fully utilizes the potential of the cello band, providing it with every opportunity to show off its range of possibilities. So, within its almost ten-minute structure, we hear slow and fast segments that are both dark and light, impressionistic, emotional, and visual. I was sorry when it ended.

Rachmaninov's Vocalise and Mahler's Adagietto are probably the most-familiar music on the agenda, although Ligeti's Lux Aeterna may come close (think Kubrick's 2001: A Space Odyssey). The Cello Ensemble performs them all wonderfully, and the music seems to exude an even more-profound mood than ever coming from such a large body of cellos.

Congratulations to producer Hans Jorgen Jensen and recording, mixing, and mastering engineer Christopher Willis for the excellent work they did. They made the album at Pick-Staiger Concert Hall, Northwestern University, Evanston, Illinois in 2013 and 2014. There is a realistic clarity to the music, by which I mean it sounds natural, with just the right amount of ambient bloom to give the instruments a lifelike appearance. There is also a truthful scope to the group's dimensionality, filling in all areas of side-to-side and front-to-back perspectives. With a wide, well-balanced frequency response and strong dynamics, the sound comes across as I would imagine it might in a live performance. It is a complete and utter pleasure listening to it.