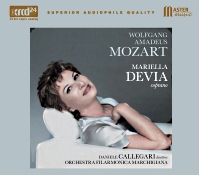 While the Italian operatic soprano Mariella Devia (b. 1948) has perhaps gained greater acclaim in Europe than she has in America during her extensive career, it has done nothing to stop her from being heard on dozens of recordings. This album, from 1997, appears to be among her best, at least sonically, which is why I suppose JVC chose to remaster it in 2015 in their XRCD audiophile series. It's hard to argue they didn't make a worthy choice.

It's an all-Mozart program, with Daniele Callegari and the Orchestra Filarmonica Marchigiana accompanying Ms. Devia on the first three items and the orchestra itself taking over the purely orchestral reins of the final number. I was not familiar with the Italian orchestra, founded in 1985, nor the conductor, but they seem well up to the task, the somewhat smallish ensemble sounding fluid and transparent.

The first selection is Mozart's Exultate, jubilate ("Exult, rejoice"), KV165, a religious motet Mozart wrote in 1773 for solo voice, orchestra, and organ. Divided into four parts with alternating slow-fast movements, it may remind the listener of the composer's symphonic works but on a smaller scale. Ms. Devia's voice is airy and confident, and her rendering of the Andante is particularly felicitous.

Next is the four-movement Regina Coeli ("Queen of Heaven"), KV108, from 1771. It, too, is a piece of liturgical music, this one a little more ambitious than the preceding work, Mozart writing the Regina for soprano, choir, orchestra, and organ. Mozart based it on one of the Catholic Church's four seasonal "Marian antiphons of the Blessed Virgin Mary," typically sung at night prayer. Here, the orchestra plays a more-prominent and dramatic part, too, with the mid-bass a weightier factor and the choir adding to the gravitas of the affair. Indeed, the soprano's solo contribution to the music doesn't even appear until the second movement, where Ms. Devia remains in lovely voice.

To close the show, we get what may be Mozart's most-familiar piece of music, the Serenade No. 13 for strings in G major, ("A Little Serenade" or, more commonly, "A Little Night Music"), K. 525, a composition the composer wrote for chamber ensemble in 1787. As there are probably 800 different recordings of it in the catalogue at any given time, the competition is intense. This version under Maestro Callegari is as good as most, although there is nothing much different about it to distinguish it from most of the others. In other words, it moves along at a stately, fluent pace, unhurried, unruffled, and unremarkable.

What is remarkable is that JVC can produce so meticulous a remastering as this one while at the same time making it so hard to get the disc loose from the center spindle. I mean, you want the disc to fit tightly, but not so tight that you practically break the disc in two trying to get it out. The rest of the JVC packaging, though, is immaculate: A glossy, hardcover Digipak-type design; liner notes bound to the inside; the disc fastened (tightly) to the inside back.

Originally recorded and produced by Giulio Cesare Ricci in December 1997 for the Fone label, the JVC (Victor Corporation of Japan) team of Tohru Kotetsu, Kazuo Kiuchi, and Shizuo Nomiyama remastered it in 2015 using XRCD/24 technology.

Of course, the folks at JVC pick only what they feel are the finest recordings to remaster, so I'm sure this one started out sounding pretty nice to begin with. Their remastering has clarified what was undoubtedly already good, clean, solid sound. On my system, however, I thought the voice was a little too bright for my ears, as was the entire upper midrange, although it certainly illuminates the sonics considerably, which never actually become hard or edgy. The rest of the aural spectrum appears equally clear, with especially quick transient response and realistic spatial dimensionality (if favoring the left side of the stage a bit much). Overall, this is very lucid sound and should please many audiophiles, even if the price for it is rather high.

You can find JVC XRCD24 recordings at any number of on-line marketplaces, but you'll find some of the best prices at Elusive Disc: http://www.elusivedisc.com/