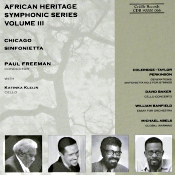 There are four good reasons listeners may be interested in this disc from 2003. First, it continues the Cedille Records series of classical music by contemporary African American composers. Second, it's very naturally and realistically recorded. Third, it contains some darned good music. And fourth, it's always a pleasure hearing the work of the late Paul Freeman (1936-2015) and the ensemble he founded and conducted for so long, the Chicago Sinfonietta.

The album comprises about an hour's worth of material by four different composers. The opening piece is called Global Warming (1990) by Michael Abels. It's an exceptionally rhythmic and harmonic work, synthesizing Irish and Middle Eastern musical styles into a surprisingly coherent and entirely satisfying and entertaining whole. The second, and longest, piece is Cello Concerto (1975) by David Baker. It is typically mid-twentieth century in its greater emphasis on atmosphere than on melody, although there are some good jazz-inspired tunes to be found if you listen carefully, especially in the third movement. The cellist is Katinka Kleijn, and the mood is mostly melancholic; but, interestingly, the Sinfonietta's accompaniment contains no cellos.

The third work represented bears the title Essay for Orchestra (1994), written by William Banfield. Containing an abundance of percussion, the piece was originally a part of a longer production, but the composer thought, rightly so, that it could stand alone. It's kind of a fun exercise in "Name that instrument." During its ten minutes duration, practically every instrument in the band gets its moment in the sun.

Then, the disc concludes with Generations: Sinfonietta No. 2 for Strings (1996) by Coleridge-Taylor Perkinson. The composer based each of its four movements loosely on descriptions of his own family: daughter, mothers, grandson, and fathers. Each movement uses one or more folk tunes combined with original melodies. The work is fascinating if slightly fragmented and sometimes repetitious.

The playing throughout is scrupulously meticulous, and Maestro Freeman is affectionate in his handling of the tunes. The whole affair is a testament to his the conductor's elegant sensibilities and innate sense of fun.

Cedille's sound, as always, goes for a natural hall ambience while occasionally overlooking ultimate transparency. Instruments sound best when they're isolated, and massed orchestral tones tend to get just the tiniest bit muddled. Nevertheless, the sound is easy on the ears, more pleasant sounding than most new recordings, and will have listeners recalling their last live concert. Which I count a very good thing.