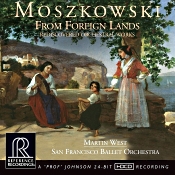 One of the advantages of having listened to and collected classical recordings for well over sixty years is getting to know more about the people who wrote the music. But I have to admit that in all that time I barely remembered the name Moszkowski. Yes, after much thought I recalled one piece, "Spanish Dances," in my collection on a Decca album with Ataulfo Argenta and the LSO. But remembering it required a stretch. So it's good to know that Martin West and the San Francisco Ballet Orchestra have done up some of Moszkowski's work in a disc called "From Foreign Lands, Rediscovered Orchestral Works." And it's especially gratifying to hear the material so well produced by Reference Recordings.

For the uninformed (and that would be me), a word from Wikipedia: "Moritz Moszkowski (1854-1925) was a German-Jewish composer, pianist, and teacher of Polish descent on his paternal side. The prominent Polish pianist Ignacy Paderewski said of him, 'After Chopin, Moszkowski best understands how to write for the piano, and his writing embraces the whole gamut of piano technique.' Although less known today, Moszkowski was well respected and popular during the late nineteenth century. He was quite prolific, composing over two hundred small-scale piano pieces, which brought him much popularity--notably his set of 'Spanish Dances' for piano duet" (on the present disc arranged for orchestra by Phillip Scharwenka and Valentin Frank).

Maestro West has chosen seven orchestral items (comprising twenty-one tracks and almost seventy-three minutes) for the album under review, music representing not only some of Moszkowski's best work but some of his most diverse. Here's a run-down of the items on the program, some of it recorded for the first time:

Most of this material is lightweight, to be sure, yet it's also most delightful in the capable hands of West and his players. The opening "Torch Dance" has a rousing spirit. The six movements of "From Foreign Lands" are colorful and characterful, each exemplifying a different country. They reminded me of things by maybe Glazunov, Gounod, or Rimsky-Korsakov. In their time (the late nineteenth century), the "Foreign Lands" suite was apparently quite famous, although today audiences might find the music hopelessly Romantic. Personally, I love Romantic music, hopeless as it (and I) may be. This is a charming and easily pleasing set of tunes.

The "Habanera" was among my favorites on the program. Yes, it may remind some listeners of Bizet's more-famous take on the subject, yet it has a distinct appeal of its own. It's light and airy and memorable. I found "By the Cradle" the most overtly "balletic" of the selections on the agenda, although I didn't find it as noteworthy as the "Habanera." Nor did I think the six episodes of "Don Juan and Faust" as easily pleasurable, while they still held their own personality, particularly the cheerful closing number. "Gondoliera," on the other hand, well captured the ebb and flow of Venice canals, and West and company provide it with a sweet and engaging performance.

Then we come to the only Moszkowski work I sort of recognized, the five aforementioned "Spanish Dances." They, too, are lightweight but totally enchanting and deserve their widespread popularity. West handles each movement carefully, giving all of them a manifestly fresh yet still clearly Spanish flavor of their own.

The two most noticeable characteristics about the sound are its dimensionality and its dynamics. The miking appears to be more moderately distanced than most modern close-up affairs. As a result, we get a realistic sense of the studio ambience, the resonant bloom around the instruments, and the impression of orchestral depth as well as width. Then there's the matter of dynamic range, which is very wide, and dynamic impact, which can be quite striking. Of course, there may be drawbacks to these qualities for some listeners, in particular those listeners not used to a natural sound; I'm afraid some people might find the sonics too soft, too repressed, or too reverberant for their taste. So be it.

In any case, I personally found the sound lifelike, even if it hasn't all of the clarity, the transparency, so prized by some audiophiles. The frequency range is extended in both directions, the balance is as perfect as one could imagine, and the overall aural picture is one of a live orchestra in one's living room.

Email ThisBlogThis!Share to TwitterShare to FacebookShare to Pinterest
Labels: Moszkowski