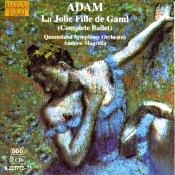 People no doubt know French composer and music critic Adolphe Adam (1803-1856) far better for his classic ballet Giselle (1841) than for the work of this two-disc set, La jolie fille de Gand, written about the same time. So, why is this? Is La jolie that much inferior to Giselle that one of the pieces should continue as a staple of the classical repertoire while the other should fade into obscurity? The answer is simply, yes. Sometimes, the public is right. The listener comes away from Giselle humming memorable tunes. Just trying to remember anything at all from La jolie is a task, even though it is pleasant-enough music as you're listening to it.

This is not to suggest that there is anything unduly wrong with La jolie, however. On the contrary, Adam filled it with charming, agreeable music, almost all of it lighter than air fluff and wholly forgettable. Anyone who enjoys ballet or light classical music, though, will surely enjoy the piece. Still and all, a two-disc set of the complete ballet may endanger one's sugar intake considerably, or it might at least try one's patience. Perhaps it is a ballet better seen than listened to straight through or better taken in small doses, like from a single highlights disc.

The story line should give you an idea of how deep the music's going to be. The plot, set in Ghent, Belgium, concerns a dancer named Beatrix, who is betrothed to Benedict, the nephew of a rich goldsmith. She is distracted, however, by the attentions of the Marquis of San Lucar. There follow scenes of conflict with both men, a series of dreams, and an attempted elopement. But, naturally, it all has a happy ending, and the proper girl and boy get to marry. I'm sorry. I tried to follow the plot line but I got bored. I figured I'd enjoy it more by just listening to the music and ignoring the story altogether. I suppose it would be even more appropriate to see it on stage some time, but that would seem almost impossible.

Anyway, Maestro Andrew Mogrelia (who specializes in ballet scores) and the Queensland Symphony Orchestra (of which Mogrelia is now the Music Director and Principal Conductor) do a good job performing all this, and I suspect trying hard not to make it appear as lightweight as it seems. And thanks to the fine Marco Polo recording, the orchestra sounds splendid.

The sonics on this 2000 release are quite good, as I say. I liked the stability of the sound stage and the rock-solid imaging left, right, and center. Front-to-back depth sounds more limited, though, as does the deepest bass and the highest treble. Fortunately, the audio has plenty of mid-bass warmth and room resonance to satisfy fans of concert-hall acoustic ambiance in their recordings. Definition, too, is more than adequate, if not so transparent as some all-out demonstration-class discs, and dynamics are moderately robust.

This is a welcome set for a rainy afternoon with one's feet up on the coffee table. I just wouldn't expect more in the way of musical substance than the score can deliver.

Email ThisBlogThis!Share to TwitterShare to FacebookShare to Pinterest
Labels: Adam