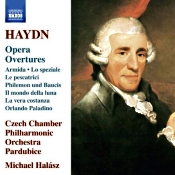 Maybe you think of Haydn as I do, as a composer of about 800 symphonies and chamber pieces. No, no, no. He also wrote a slew of operas, most of which we never hear anymore, even though people seemed to love them in their day. Anymore, about all we hear from his operas are the overtures, the present album containing some fourteen of them, ably performed by Michael Halasz and the ambitiously named Czech Chamber Philharmonic Orchestra Pardubice.

The smallish orchestra, comprised of about thirty or so players, is just the right size for Haydn. We get an intimate, fairly transparent presentation from this size an ensemble. Not so small that that it diminishes the weight Haydn's work but small enough to capture the zest and vigor of his music. Maestro Halasz does a good job keeping them on their toes and ensuring the scores get just treatment.

Anyway, as I say, there are a number of items on the disc--overtures, prologues, introductions, and sinfonias--and for those interested I've listed them below:

I've always suspected it's hard for any conductor to go too far wrong in the scores of Haydn or Mozart or Schubert. The music is simply too delightful. Nevertheless, Maestro Halasz does an extra-special job with it. Although he never takes anything at a breakneck speed, he and his crew do provide a zesty, frothy mixture of notes. The works are lightweight, to be sure, and the listener will probably have a hard time telling one from the other; still, Halasz does his best to differentiate them so it doesn't all sound the same.

Among my own favorites from the album were The Fisherwomen for its vitality; Infidelity Outwitted for echoes of Handel; The Deliberations of the Gods for its relative gravitas; Life on the Moon, just because it's fun; and Orlando the Paladin because of its high spirited nobility. But not to like any of it is to quibble. It's a hearty enjoyment.

Producer Jiri Stilec and engineers Vaclav Roubal and Karel Soukenik recorded the album at The House of Music, Pardubice, Czech Republic in January 2015. If played too loudly, the sound has a tendency to appear rather close; played at a normal (or more realistic) level, however, it's really quite good. There's a nice stereo spread, with uncommonly good depth, and a pleasantly warm, ambient glow. Because there aren't a lot of players involved, the sound is clearer, more lucid, than you might get from a full orchestra, yet the hall's natural bloom prevents the sound from becoming harsh or bright. It's all very natural and welcome.