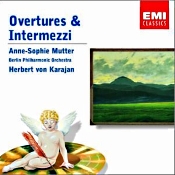 While many other classical record companies had cut back severely on their output or curtailed production altogether in the early 2000's, it was reassuring to see EMI maintaining a healthy monthly release schedule of new and reissued material. Of course, the company would finally turn over its catalogue to Warner Classics, but in this case, their reissued stuff was among the best there was. Now, Warner Classics have made this 2003 reissue available on their own label, although you can still get it new on the older EMI label if you look around for it.

Anyway, the album in question is all about Maestro Herbert von Karajan, who did most of his recording during the Sixties, Seventies, and Eighties with DG but always keep his ties open with EMI, having signed a contract with them all the way back in the Forties. He continued working with EMI almost exclusively through the Fifties and sporadically thereafter. While the earliest overtures and intermezzi contained on this album derive from 1960 and 1976, most of it is from the early 80's.

As usual, Karajan played them with his somewhat Romantic, glamorous, grandiose touch, the thematic qualities of the music sometimes playing second fiddle to the sheer beauty of the sound. It's what Karajan did best and why he was one of the most-popular conductors of his time. With bits like Anne-Sophie Mutter playing the violin in Thais, the old magic returning in Hansel und Gretel, and the Berlin Philharmonic at their peak, the collection remains a surefire crowd-pleaser.

EMI's sound for Karajan and the BPO is less warm, less padded, and less congested than what we often heard from the same ensemble on DG. Instead, the EMI sound is slightly bright, fairly open, and reasonably transparent. Surprisingly, perhaps, I found the oldest recording on the disc sounding the best, the 1960 rendering of Mendelssohn's Hebrides Overture. To my ears it is the most realistically ambient, with its stereo spread the widest, its depth of image the most noticeable, and its resonant hall sonics the most clearly captured. And as with almost all newer remasterings, there is virtually no background noise to contend with and no appreciable loss of high end. In all, then, this is a pleasant collection.