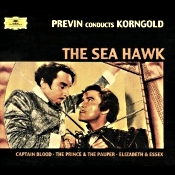 Movie music owes much of its being to Max Steiner and Erich Wolfgang Korngold. The latter is responsible for most of what we now consider to be "symphonic" themes and accompaniment, sometimes mistakenly associated with Hollywood blockbusters. Without Korngold, in other words, there wouldn't have been a John Williams and his ilk as we know them today.

The present disc, released by DG in 2001, contains four Korngold suites from the Errol Flynn movies Captain Blood, The Sea Hawk, The Private Lives of Elizabeth and Essex, and The Prince and the Pauper, with conductor, composer, pianist Andre Previn leading the London Symphony Orchestra. It was good to hear him back at the helm of his old orchestra and doing music that comes so naturally to him.

Anyway, Austro-Hungarian composer Erich Wolfgang Korngold (1897-1957) came to the movie industry in 1934 after a flourishing career as a classical composer for the European orchestra and opera stage, so it's understandable why his films' musical scores sound so luxuriant, so rich, so thematically complex. Starting in 1935 with his first important film score (and for which he went uncredited), Captain Blood, his music has thrilled audiences as much as the swashbuckling daring-do of the films' heroes; but, of course, he wasn't just a composer of big-scale, heroic material, as the four suites on this disc demonstrate.

Previn's album begins with one of the greatest and most memorable of all action-adventure movie scores, The Sea Hawk. No matter how many times I listen to it, it impresses me with its splendor and eloquence. Think Star Wars here, and you'll understand where Williams got his inspiration. The second and third suites, The Private Lives of Elizabeth and Essex and Captain Blood, are almost if not quite as stirring; and the concluding suite, The Prince and the Pauper, shows the lighter side of the composer. There are echoes of Liszt and Rossini in all of Korngold's music, which is a compliment, indeed.

The question of how well Andre Previn interprets this material is hardly of consequence. Previn grew up in Hollywood (he graduated from Beverly Hills High School) and knows how to handle a Hollywood score as well as anyone. He does so with consummate skill, swashing a buckle or conjuring up a tender moment with equal zest and grace. The question of The Sea Hawk, however, is how well it holds up compared to the celebrated performance by Charles Gerhardt on RCA. The answer is, pretty well, actually, helped by the fact that Previn was back in front of an orchestra he knew as intimately as anyone could know an orchestra.

But, then, there is the matter of DG's sound. Although the RCA recording is much older than Previn's, it has the clearer, more robust sonics. DG engineers, on the other hand, opt for a softer, more resonant, more one-dimensional sound. Switching to the RCA is like wiping away a thin haze from the surface of the sonic picture. However, other than The Sea Hawk the two discs contain entirely different Korngold companion music, so perhaps both discs are essential to one's film-music library in any case.

Email ThisBlogThis!Share to TwitterShare to FacebookShare to Pinterest
Labels: Korngold