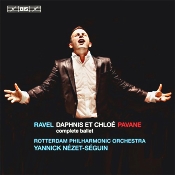 French impressionist composer Maurice Ravel began writing his one-act, three-scene ballet Daphnis et Chloe in 1909, premiering it in 1912 under the baton of Pierre Monteux. Ravel described the work as a "symphonie choréographique," a choreographed symphony. I mention this because there are times, such as listening to the suites alone, when one gets the sense that the conductors were simply stringing together a random selection of tone paintings. The work should feel of a piece, something the aforementioned Monteux and other conductors like Charles Munch and Charles Dutoit succeed at doing admirably. Which brings us to the present recording with Yannick Nezet-Seguin and the Rotterdam Philharmonic.

It may be a measure of Nezet-Seguin's energy and enthusiasm that he manages to be the principal conductor of two major orchestras, both the Rotterdam Philharmonic and the Philadelphia Orchestra. He usually communicates that energy in his recordings, sometimes to the detriment of the performance, but most of the time not. Here, he is in flying colors, pouring a good deal of vitality into a vivid score that undoubtedly benefits from his passion.

The story of the ballet deals with the love between a goatherd, Daphnis, and a shepherdess, Chloe. Choreographer Michel Fokine adapted the tale from the Greek writer Longus, dating back to somewhere around the second century A.D. It's colorful, poignant, and exciting, the music communicating a variety of moods.

Even though Nezet-Seguin puts a good deal of zeal into his interpretation, as I say, particularly in the middle of the second part and the final movement of the third part, he is not without a delicate touch in the more-peaceful, atmospheric sections. There were a few times when I thought his musical descriptions appeared a bit too plodding, as in the "Danse grotesque," but at least he has good reason for approaching the characterization this way. When the conductor appears fully engaged, which is most of the time, the music sounds graceful and fluid, generally flowing through the transitions elegantly.

Most important, Nezet-Seguin does a good job conveying the more-atmospheric features of the music, never letting it sink into mere picturesqueness, sentimentality, or bombast. Let's say, it never gets boring and mostly remains quite beautiful. He seems to get the most out of the orchestra, too, as they sound lustrous and luxuriant from softest pianissimo to loudest crescendo. The wordless chorus also do a fine job, never overpowering the orchestral contribution but becoming an integral part of it.

Accompanying the ballet we get the Pavane pour une infante defunte ("a slow dance for a dead princess"), which Ravel originally wrote for piano in 1899 and didn't get the orchestral version heard here until 1910. Nezet-Seguin takes it rather differently than other conductors, starting more slowly and gradually but modestly quickening the gait toward the middle, easing down again at the end. It keeps the piece from dragging, to be sure, but it perhaps robs it of some of its melancholy bearing.

The first thing one cannot help noticing about the sound is the huge dynamic range involved. It begins so softly, it may tempt you into turning up the volume. I advise against doing so because it isn't long before the louder sections kick in, and you may be sorry. Anyway, there is a commendable range and impact to the dynamics, with a reasonably good deep bass. The next things one notices about the sound are its sense of airiness, openness, depth, and space.

The "however" in all of this is that while the dynamics, air, and depth sound excellent, the midrange clarity is only average, there's a somewhat forward quality to the upper mids, and there isn't much sparkle in the highs. There is also a very slight coarseness about the sound, noticeable especially in the chorus.