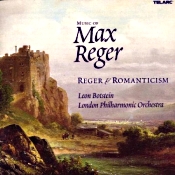 There was a time when the folks at Telarc were releasing so many discs in hybrid SACD, it actually became a pleasure listening to an album they had only made in straight two-channel stereo. But, more than that, it was particularly nice to hear from the late nineteenth, early twentieth-century German composer Max Reger, who doesn't get recorded much these days. He was extremely popular in his lifetime, 1873-1916, but he fell out of favor in subsequent years. He's worth a listen on this 2002 issue with Leon Botstein and the London Philharmonic.

I have to admit, however, that my only real knowledge of Reger before this disc had come by way of his Variations and Fugue (Naxos) and his Piano Concerto (RCA). So this collection of brief tone poems, all written in a Romantic vein late in his short life, came as a delight, especially as Botstein appeared to have a natural affinity for Reger's music and the LPO responded so well to him.

First up on the program, there's a set of works based on the paintings of Swiss artist Arnold Bocklin. These pieces are self-evident with titles like "Hermit Playing the Violin," "In the Play of the Waves," "The Isle of the Dead," and "Bacchanal." Each lasts from four to eight minutes, and together they represent the composer's many and varied moods. Not quite Pictures at an Exhibition but close. "Hermit Playing the Violin" couldn't help reminding me of the famous blind-violinist scene from The Bride of Frankenstein, but I also found "In the Play of Waves" particularly playful and descriptive, with Botstein gently caressing the notes.

Next is a single work called "To Hope" that is done with a vocal by mezzo-soprano Catherine Wyn-Rogers, and it's quite lovely, both the singing and Botstein's warm accompaniment. Finally, there is another set of tone poems, three of them this time, called "A Romantic Suite After J.F. Eichendorff." They are actual poems the composer set to music but without the words. These pieces are probably the most descriptive of anything else in the album, and they place Reger in the category of a minor-league Richard Strauss (with whom he was a direct contemporary) or maybe Dvorak. Reger's Romantic tone poems may also safely take their place alongside the pastoral works of Arnold Bax, Ralph Vaughan Williams, and Frank Bridge for their lovely, flowing melodies.

What more, Telarc's sound does the music justice. It is quite revealing, with a natural tonal balance and a realistic sense of ambiance. Depth perception is more than adequate, as are dynamics and frequency range, although in this music the latter qualities are not of paramount importance. Overall transparency is also good, and that is the thing that matters most. Even after more than a decade since its release, I find this disc a recommendable item.

Email ThisBlogThis!Share to TwitterShare to FacebookShare to Pinterest
Labels: Reger