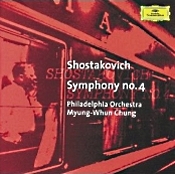 Ten minutes into Shostakovich's Fourth Symphony I remembered why the Soviet government, that is, Stalin and his censors, weren't too keen on the composer's music and why, completed in 1936, it didn't see its first public performance until 1961. "Chaos instead of music" is how the government characterized such works. But it didn't take much more than those first few minutes to revalidate the symphony's worth, its strength, and its oddly immediate accessibility. It is one of Shostakovich's biggest and most frenetic compositions, to be sure, but it has a grand dignity and refinement about it despite its seeming turmoil, especially in the hands of Maestro Myung-Whun Chung.

Russian composer Dmitri Shostakovich (1906-1975) divided the Fourth Symphony's five movements into two enormous opening and closing sections filled with endless eruptions of loud rhythms and sensations, book ending three inner movements of relative solitude and repose. I've read that Shostakovich revered Mahler, and in the Fourth his homage to the older composer is more than evident. The symphony's size for one thing, over an hour; the juxtaposition of flaming outbursts and beauteous tranquility another; the waltz-like interior themes and the parodic, sardonic phrases, and you get the idea. It all adds up to a work in which Shostakovich repeats nothing, yet everything seems to spring naturally in variation from everything else.

Best of all, the conductor, Myung-Whun Chung, appears both at ease in the music and able to communicate its diverse temperaments with almost casual simplicity, with the Philadelphia Orchestra playing splendidly. This may not be Shostakovich's most popular piece of music--the Fifth, the Eighth, and the Tenth Symphonies probably take that honor--but for me it deserves a place in every classical library and a listen by every music lover of every persuasion.

DG's sound is almost as imposing as the score. However, like the Symphony itself, the recording had to wait to see daylight. The folks at DG recorded the album in 1994 and waited eight years before releasing it. I have no idea why; its sound is a nifty bit of engineering. The Philadelphia Orchestra has always been rather a tricky outfit to record; the CBS (now Sony) and EMI recordings in Philadelphia often sounded hard, edgy, or overly bright. DG have recorded the orchestra somewhat closely, and the sonics are still a tad on the hard, forward side; still, overall, the disc is wonderfully clear, clean, and dynamic, with a deep bass that sets off the composer's more momentous occasions with undoubted authority. At the time of this writing, I was more than willing to put it on my list of ten best classical recordings of the year.