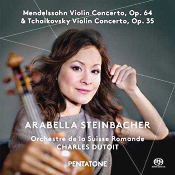 For those of you not yet acquainted with the German-Japanese violinist Arabella Steinbacher, she has won several important international prizes, recorded over a dozen albums, and received an Anne-Sophie Mutter Foundation scholarship. To give you an idea of people's respect for her talent, Ms. Steinbacher currently plays the Booth Stradivarius (1716) provided by the Nippon Music Foundation.

Having already recorded concertos by Mozart, Beethoven, Brahms, Dvorak, Bruch, Bartók, Prokofiev, Shostakovich, Milhaud, Khachaturian, and Korngold, here she gives us an album of possibly the two most-famous violin concertos of them all, the Mendelssohn and Tchaikovsky. If you are already familiar with Ms. Steinbacher's work, you'll like what you hear. With her fluid tone, incisive insight, and emotive style, she does excellent work in both pieces. And it's invariably a pleasure to have the suave Charles Dutoit leading any orchestra.

Ms. Steinbacher opens the program with the Violin Concerto in E minor, Op. 64, which German composer and musician Felix Mendelssohn-Bartholdy (1809-1847) premiered in 1845, his last big orchestral work. Ms. Steinbacher adopts tempos that appear energetic but never rushed. The performance sounds just as one might hope, never lagging, never sentimentalized, never hurried. She invests it with a wealth of humanity as well, making Mendelssohn sparkle in the process. Mendelssohn should above all dance and shine, which Ms. Steinbacher accomplishes with a refined ease. The interpretation is both elegant and vivacious, a pleasing combination.

The second movement, which Ms. Steinbacher takes at a little slower, more-dreamy pace than many other soloists, nevertheless sounds perfectly judged. It has a timeless beauty about it that is hard to resist. Then she moves into the final movement with a animated charm, ending the piece with a wonderfully bubbly exuberance.

The second item on Ms. Steinbacher's agenda is the Concerto for Violin and Orchestra in D major, Op. 35, by Russian composer Peter Tchaikovsky (1840-1893). The composer wrote it in 1878 but premiered it several years later because the person he originally wanted to perform it deemed it unplayable. Anyway, here things are a little different, and some listeners may balk at Ms. Steinbacher's somewhat leisurely approach to the first movement. Although she seems to take things a little too slowly at times, her interpretation is sensuous to say the least. Indeed, it is one of the most intensely placid performances of this piece I think I've heard, still passionate if in a quieter way. It's moody, atmospheric, serene, yet explosive when necessary.

The question one always has to ask of any new recording of old warhorses, though, is whether the new effort is in any way better than what is already available from dozens of other commendable discs. In this case, I'm not sure Ms. Steinbacher's album would be my first choice in this repertoire. However, the disc will not disappoint her fans, and there is no denying her virtuosic playing.

Pentatone package the disc in an SACD case, further enclosed by a light-cardboard slipcover.

There is usually something one notices first about the sound of an album, and in this case it was the clarity of the violin: sweet and natural and ultraclean. The next thing I noticed was the dynamic range and impact of the transients. Again, these characteristics produce a very lifelike reproduction of the solo instrument and orchestra. The recording's stereo spread also appears quite realistic, stretching between the speakers but not much beyond; and orchestral depth, while modest, appears real enough. The whole affair is warm and smooth, making an appealing proposition.