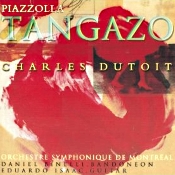 It appears that composer, arranger, and bandoneon player Astor Piazzolla (1921-1992), born in Argentina and raised in America when his family emigrated to New York in 1924, continues to be both admired and scorned for his work in the field of tango music. In the Forties, Fifties, and Sixties, he almost single-handedly resurrected the moribund genre, yet he did so by infusing the traditional melancholy tango with fresh inputs of jazz and classical influences and even by broadening its approach to the full orchestral field. It's here that Maestro Charles Dutoit and his old, ultrasophisticated Montreal Symphony Orchestra take us on this 2001 Decca release. The program is, perhaps, different from the one we might expect, different for these musicians and different for the tango, but it's an admirable and highly listenable collection of music in any case.

There are seven short pieces for orchestra represented on the program, all of them sounding like popular classical music tinged with hints of tango, so it's not exactly for fans of traditional tango unless they have an open mind. The album begins with possibly Piazzolla's most popular piece, "Adios Nonino," which combines a big, robust sound with the more sensuous and heavyhearted aspects of conventional tango. It is also representative of the music on the disc as a whole. Dutoit and company play with conviction.

Following this are the more lyrical numbers: "Milonga del angel," which doesn't sound "tango" at all, and the Double Concerto for bandoneon and guitar, which is perhaps the most haunting of all the selections and the one I fell in love with. Inspired playing by Daniel Binelli on the accordian-like bandoneon and Eduardo Isaac on guitar contribute to a most-enjoyable three-movement exploration of moods.

"Oblivion" takes us again to the slow, heartbreaking atmosphere of "Milonga del angel." Then we get "Tres movimientos tanguisticos portenos," the biggest of the orchestral showpieces, starting leisurely but building up a good head of steam by its fiery "Vivace"conclusion. The last two items, "Danza criolla" and "Tangazo" are the most impressionist pieces in their shadings and temper swings and maybe the most modern sounding in their reduction of orthodox tango harmonies. Together, the music offers an extended and diverse look at a musical form more complex than we sometimes give it credit.

Maestro Dutoit may not seem ideally suited for this kind of thing, but under his leadership the music takes on a dignity and status that is no doubt commensurate with its actual importance. Put another way, this music may not sound as graceful or dignified under some other conductors, so I suppose it's a good thing we have someone like the suave Dutoit performing it. Of course, there will always be listeners who prefer a more orthodox tango approach, and for them there are any number of other good tango recordings. This one takes Piazzolla more into the orchestral concert world.

Decca's sound, as always with this Montreal ensemble, is big and bold, with a decent amount of lifelike orchestral depth and plenty of natural warmth and detail. It's true the bandoneon and other solos appear too closely miked for ultimate realism, yet they display an impact and definition that are still commendable. Although the disc may be well over a decade old, it is still something well worth investigating.

Email ThisBlogThis!Share to TwitterShare to FacebookShare to Pinterest
Labels: Piazzolla